Physicists to gather for international astronomy workshop at Ole Miss

Dozens of esteemed scientists from around the globe are headed to the University of Mississippi for a four-day workshop on the latest in gravitational-wave astronomy, hosted by the UM Gravitation, Astrophysics and Theoretical Physics Group in the Department of Physics and Astronomy.

The “Strong Gravity and Binary Dynamics with Gravitational Wave Observations” workshop convenes Feb. 27 to March 2 in the Yerby Conference Center. The event is supported in part by Emanuele Berti’s National Science Foundation CAREER Award and by a Marie Sklodowska-Curie Research and Innovation Staff Exchange Action network, funded by the European Union’s FP7 program.

“This network supports exchanges of gravity researchers among the participating nodes,” said Berti, associate professor of physics and astronomy. “In addition to Ole Miss, there are five nodes in Europe, one in Japan and one in Canada. A dozen researchers will visit campus for a month before and after the workshop.” 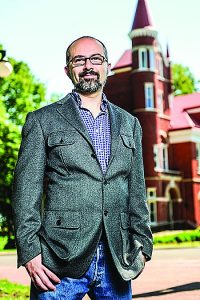 About 50 scientists representing some 30 research agencies and institutions of higher learning are scheduled to attend. Researchers will discuss several topics in the newborn field of gravitational-wave astronomy, including the astrophysics of compact binary populations, spin measurements in compact binaries, strong-field tests of Einstein’s theory of general relativity and how to look for hints of new gravitational physics beyond Einstein’s theory.

International affiliates include Instituto Superior Técnico-Lisbon and University of Aveiro in Portugal; Sapienza University of Rome; Institut d’Astrophysique de Paris; the universities of Birmingham, Cambridge and Nottingham in England; Nagoya University in Japan; and Amsterdam University in the Netherlands.

A fellow of the American Physical Society, Berti is well-known for his theoretical work in gravitational physics. He was invited to write a “Viewpoint” piece that accompanied the paper announcing the discovery of gravitational waves in the journal Physical Review Letters. Other scientists often visit the university to collaborate with him.

“Mauricio Richartz, a professor in Brazil, won a Fulbright fellowship to visit my group for four months in 2017,” Berti said. “Caio Macedo, a postdoc in Brazil, won an American Physical Society Travel Award to work with me this spring.”

Ole Miss physicists were part of the research collaboration that first detected gravitational waves in 2015. Marco Cavaglia, UM associate professor of physics and astronomy, serves as assistant spokesperson for the LIGO Scientific Collaboration and was founding chair of its Education and Public Outreach and Diversity Committees.

The department’s standing in research circles is reflected in U.S. News’ 2017 listing of Best Global Universities, where the university is ranked No. 11 globally for overall international collaborations in physics. Also, the department’s faculty rank No. 6 in the world in terms of producing work that is cited by others in their research publications.

“Our department’s worldwide reputation and competitiveness has been increasing in recent years because of the quality of our research and our strong ties to global collaborations, and we have been able to attract high-quality faculty and graduate students with international backgrounds,” said Luca Bombelli, chair and associate professor of physics and astronomy.

These achievements continue to benefit the department as it branches out into new areas, says Josh Gladden, who joined the faculty in 2005 and is the university’s interim vice chancellor for research and sponsored programs.

“When you raise the bar like that in a department, the standard becomes nationally and internationally recognized work, and that breeds more nationally and internationally recognized work,” said Gladden, also an associate professor of physics and astronomy. “If that’s what you’re around — your colleagues are publishing papers and getting invited to present at conferences around the world and being recognized for their contributions to their fields — then that’s the bar you’re going to try to jump over. It really elevates the work that everybody does.”

For more about the workshop, visit www.phy.olemiss.edu.