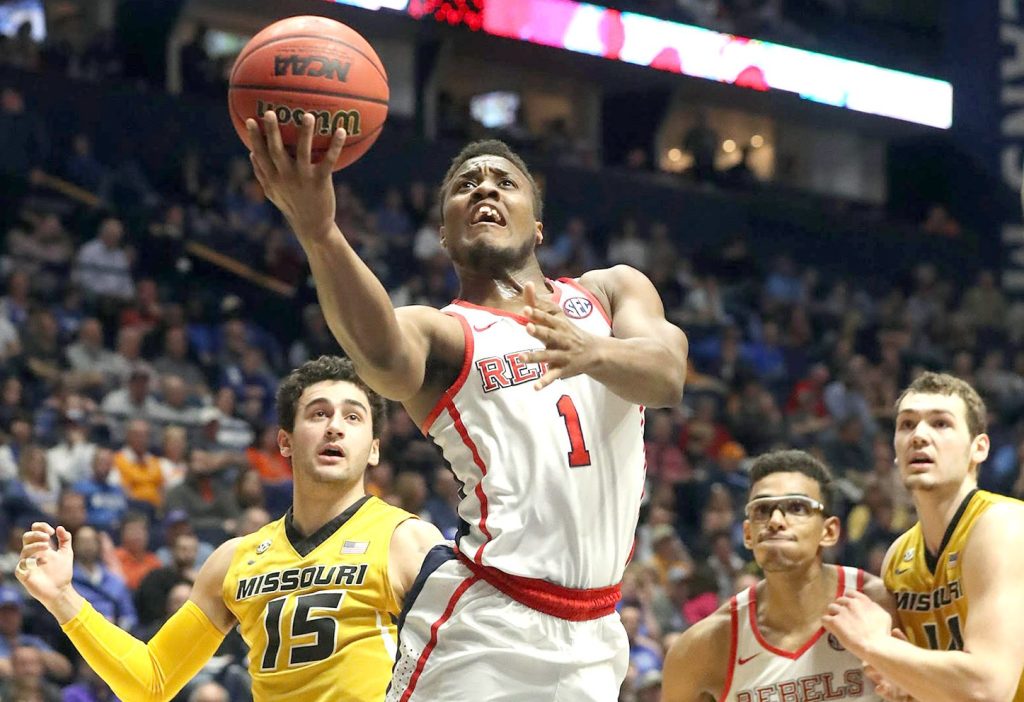 NASHVILLE, Tenn. — Deandre Burnett took the floor at Bridgestone Arena for his first game in eight days with kinesio tape on each of his ailing knees. Ole Miss coach Andy Kennedy joked the rehabilitative wrapping technique wouldn’t affect his junior guard’s mobility because Burnett “moves at a snail’s pace anyway.”

After a performance Thursday night that helped Ole Miss live to see another day at the Southeastern Conference Tournament, Kennedy is looking for more of that adhesive for his leading scorer.

“We’ll throw another couple strands of tape on there,” Kennedy said.

Burnett led four Ole Miss players in double figures with a game-high 23 points, and the Rebels ran away with an 86-74 win over Missouri in its tournament opener. Sebastian Saiz had 14 points and 16 rebounds for his 20th double-double of the season, Terence Davis scored 19 points and Breein Tyree added 11 to help the Rebels (20-12) win their first conference tournament game since 2014.

Ole Miss will face No. 3 seed Arkansas in the quarterfinals Friday at approximately 8:30 p.m.

Burnett shot 6 of 9 from the floor, 4 of 5 from 3-point range and 7 of 11 from the free-throw line while playing through lingering knee pain that Kennedy said will have to be addressed after the season. He scored a season-low two points in 23 largely ineffective minutes against Alabama last Wednesday and didn’t play in Ole Miss’ regular-season finale against South Carolina but came off the bench against Missouri (8-24), subbing in and out for 28 minutes while wincing at times.

“Just trying to battle through it and play hard for my team,” said Burnett, who scored 28 points against Missouri in the team’s previous meeting Feb. 25. “That was my mindset coming in.”

It didn’t have much affect on his shot. Burnett knocked down his first four 3s and started 6 of 6 from the field, scoring 16 of his points in the first 20 minutes to help the Rebels to a 46-36 halftime lead.

“Any time you make your first shot, it feels good and all the pain goes out the way,” Burnett said.

Ole Miss led by as many as 17 with 11:45 left and held a double-digit lead the rest of the way in its third win over the Tigers this season. Missouri got within 10 with 4:58 remaining on a pair of free throws from Terrence Phillips, but Ole Miss answered with six straight points to take control for good.

“This time of the year, it’s just all about having the opportunity to stay and play again,” Kennedy said. “That’s what we did.”

Missouri hit 16 3s in its first-round upset of Auburn on Wednesday and knocked down six of its first 12 shots from deep against Ole Miss but eventually looked like the team that began the day 333rd nationally in 3-point field-goal percentage, connecting on just six of its final 17 shots from beyond the arc.

Phillips, Jordan Barnett and Kevin Puryear each scored 15 points for the Tigers, who played their final game under outgoing coach Kim Anderson.