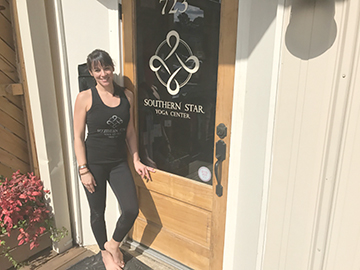 When Stevi Self broke her back in 6th grade, she tried numerous ways to alleviate the constant pain. Today she owns Southern Star Yoga. She believes yoga is a way of life, and she has touched many lives through the practice.

Self was active in high school, but was focused on schoolwork in college. That’s when her back pain worsened. She decided she needed a change and wanted to try something new. However, nothing worked until one of her close friends advised her to try yoga.

Yoga changed Self’s life immediately. Just a week after beginning the practice, her back pain disappeared.

Self began practicing yoga in California. “Back in the 1990s, yoga was already popular in California. However, yoga became popular a lot later here in Oxford.”

She grew up in the Mississippi Delta, but later moved to California. Self returned to Mississippi in 1998 because she was pregnant with her first child. Oxford appealed to her, and she decided to stay and practice yoga.

Self taught at a local fitness center called Health Flex for 10 years. Then she decided to create her own yoga studio.

“Teaching at the Health Flex was great, but I wanted to create a more yoga atmosphere for my clients, and that is why I initially started the studio,” she said.

Self said she wanted to create a place specifically for yoga. She believes yoga is powerful and deserves to be practiced by itself.

When Self started the yoga studio, she never envisioned it would become as popular as it has. She was hoping at least 50 people a month would practice, but she never thought there would be thousands of different people walking through her doors. Southern Star now has more than 20 plus yoga teachers and 100 of members.

“I have been all over the world and have seen many yoga studios, but never have I experienced a yoga studio that is this popular and loved,” she said. “People love to come here. It has not just become one of the most popular yoga studios in Oxford. It is known throughout the entire state.”

Julia Jones, a former University of Mississippi, student said, “I love to come back to Oxford, especially, because I get to visit my favorite yoga studio.”

Jones, who lives in Jackson, said Southern Star is one of the main reasons she returns. “The atmosphere is great, but the people and the instructors are even better,” she said. “They are the ones who create this warm feeling that makes you want to come back, because even though you are working out, they make you feel relaxed.”

Self said said she never imagined the business would be this successful for so long, and it is constantly growing. For the past 20 years, Self has practiced yoga almost daily. After the birth of her second child, she stopped teaching for a bit. Two weeks later, her back began hurting.

“That’s when I realized I was basically stuck with it for life,” she said. “I have had a relationship with yoga for over 20 years now, and it has changed my views many times over the years.”

Self said her current yoga inspiration is Shawn Johnson, who teaches Bhakti yoga in New Orleans, which is the yoga of chanting and mantra.

She has been exploring the mantra aspect of yoga, which includes Sanskrit and chanting. Before opening the studio, she was a musician, but she put her guitar aside and focused on yoga.  Mantra has been a way to incorporate music into yoga.

“That is the beauty in yoga,” she said. “It is constantly changing with your views while you learn new things about yourself every day and learn to grow. Yoga has impacted my life, and I have seen it impact numerous lives around me. It is great for a person’s health and mind, and the benefits of it are neverending.”