Ole Miss’ backcourt punches back in win over Syracuse 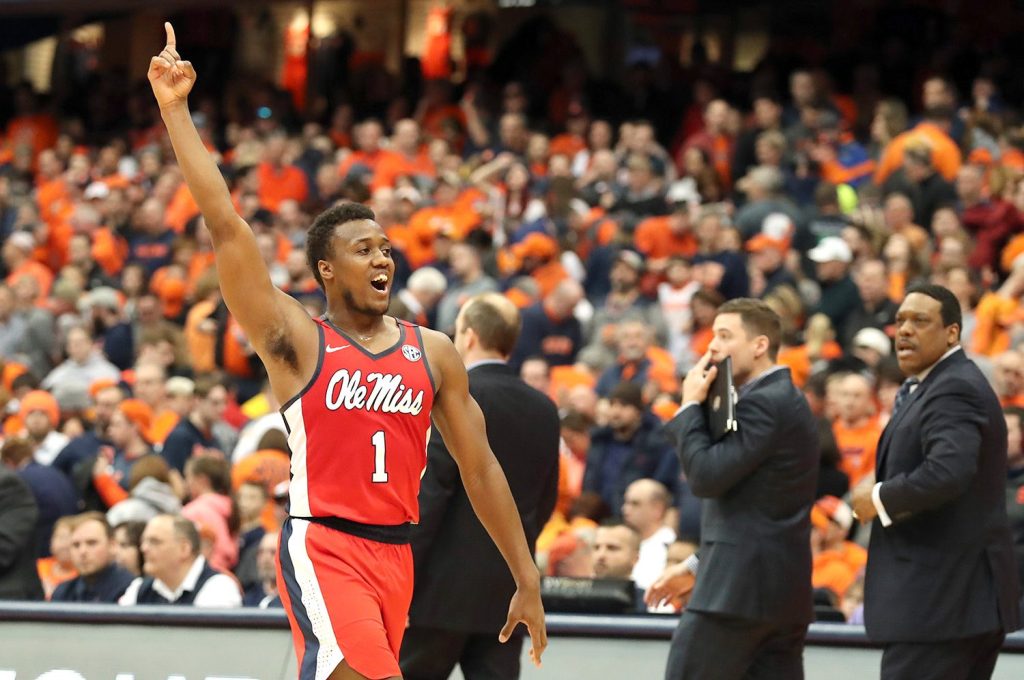 Ole Miss' Deandre Burnett celebrates after the Rebels' 85-80 win over Syracuse in the second round of the National Invitation Tournament on Saturday at the Carrier Dome in Syracuse, N.Y. (Joshua McCoy/Ole Miss Athletics)

SYRACUSE, N.Y. — Sebastian Saiz was struggling, and Syracuse was surging.

Terence Davis, Deandre Burnett and Cullen Neal kept Ole Miss afloat throughout its game against the Orange in the second round of the National Invitation Tournament on Saturday with the Rebels’ usual enforcer finding it tough to finish over the top of the Orange’s trees inside. Davis and Burnett started their own 9-0 run with three consecutive 3-pointers to begin the second half, giving Ole Miss its largest lead at 45-38.

But the haymakers were just getting started.

The Orange, who used their size advantage on the interior to stay close in the first half despite missing their first 10 3s, got Tyus Battle and Andrew White going from the outside to complement their girth. Battle poured in all 17 of his points in the second half while White scored all but five of his 18 in the final 20 minutes.

They accounted for seven of Syracuse’s points during an ensuing 9-2 run. Battle’s 3 erased Ole Miss’ lead nearly as quickly as it had been built, drawing the Orange even at 47 with 14:54 left.

But Davis, Burnett and Neal, who combined for 64 of Ole Miss’ 85 points, always had an answer in what turned into a shot-making contest down the stretch.

“Cullen Neal, a new Rebel. Deandre Burnett, a new Rebel. Terence Davis, never been in this situation before,” Ole Miss coach Andy Kennedy said. “I think as they’ve continued to garner experience and confidence, their production has gone up.”

Neal, who went 4 of 7 from the field, put the Rebels back in front 19 seconds later with one of his three treys. Battle had a dunk three minutes later to get Syracuse within one before things really heated up.

Davis, who missed just three of the 14 shots he took, responded with one of his career-high six 3s and drained another one with 9:58 left to put the Rebels up six. Battle scored five straight points with a 3 and a layup, but Davis stroked another 3. Battle answered with yet another before Burnett put in a baseline layup.

Saiz shot just 4 of 13 from the field but got free near the elbow to push Ole Miss’ lead back to six, but White hit 3s on two of Syracuse’s next three possessions, the latter tying it at 71. The Orange missed 17 of their first 20 3s but made five of their last 10.

Neal came back with a 3 of his own only for White to answer with another one. That tie lasted just 16 seconds before Burnett banged home another trey to give Ole Miss a 77-74 lead with 3:24 left.

“Their length inside, it was bothering (Saiz), but as we started making shots — specifically the trio of TD, Cullen and Dre, they made huge ones in the second half — they get extended, which allowed us to get some penetration,” Kennedy said.

Syracuse got a dunk from Taurean Thompson and had a chance to tie it again when Tyler Lydon was fouled with 1:45 left. Lydon missed the second free throw before Burnett bailed the Rebels out of a stagnant offensive set with their 15th and final 3, pulling up at the top of the key with the shot clock running down to give the Rebels a two-possession lead with 1:22 left.

It’s the first time since Dec. 13, 2013 that Ole Miss has connected on that many shots from beyond the arc.

The Orange made it a one-possession game again on a jumper from Battle, but the Rebels passed the ball around Syracuse’s late press and got it to Neal, who salted the win away with a pair of foul shots with 27 ticks left. Neal, Burnett (7 of 11 from the floor) and Davis combined to make 22 of their 32 shots on a day when Ole Miss had to have it.