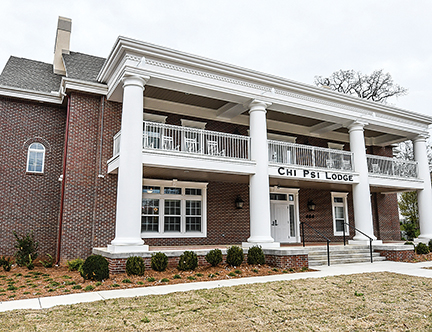 Bruce Newman The new Chi Psi Lodge at the University of Mississippi, will have a ribbon cutting ceremony today at 11:30.

Just a decade after Ole Miss was founded, Chi Psi Fraternity came to campus. And just a decade after electing to go dormant due to low membership in 2007, the Alpha Gamma chapter marks another historic moment today as it celebrates the rebuilding of its Fraternity Row lodge and revitalization of its chapter.

Ed Coleman, a 1987 alumnus, has been busy with many of the lodge’s particulars since construction began in September 2015. The lodge, which sits across from Bishop Hall, was developed with newer building technology.

“All of our sheetrock is impact-resistant sheetrock, which is what you need when you have a bunch of boys living in a house,” Coleman said. “We have a bamboo floor throughout the Lodge — the hardest wood out there — it’s very durable. We have a formal living room that is locked off so it can be used for alumni and special events and holds the historical things of the fraternity. There is a full house mother/director suite and full-time commercial kitchens that serve 14 meals a week.”

The Lodge also has a designated party entrance and two garage doors that lead to the patio.

Current members are enjoying the state-of-the-art facility mixed with the welcoming atmosphere. Collin Childress, a junior Management Information Systems Major, notes there are many enjoyable aspects about the new lodge.

“There’s so much about the Lodge that we all love. Sitting on the balcony on a warm day and being able to see the chapel, and just watch people commuting is a pretty nice way to relax,” Childress said. “On a colder day, you can’t beat going into the basement and playing a round or two of pool with other brothers and watching a game. All in all, you can’t go wrong with any part of the Lodge.”

‘A place to call home’

Three years after the chapter’s low membership led the chapter to go inactive, the Chi Psi house was unceremoniously demolished on a summer afternoon in 2010. With the chapter’s rebirth in 2013, a physical building is a sight for sore eyes for its current members.

“Best thing about the new Lodge isn’t any physical feature, but rather having a place to call home,” said sophomore Business Marketing major Ethan Yappen.

“No matter the kind of day you had, no matter what’s going on in your life—the good, the bad, the ugly—when you walk through those doors and see that badge on the floor you know two things for sure. I’m home, and I’m surrounded by 70 brothers who have my back no matter what,” Dadlani said.

Alumni were happy and proud to take part in reconnecting the chapter to the Ole Miss campus.

“Chi Psi has had a proud tradition at Ole Miss, and this new Lodge will be the centerpiece for the next chapter in our history,” said Murray Huber, who graduated in 1979 and is the capital campaign co-chair for the new facility. “With more than 400 living alumni and a resurgent undergraduate membership, the time is right for our fraternity to build a first-class facility that will support our members and complement a growing Ole Miss campus.”

Chi Psi’s return to campus began in January 2013, when Chi Psi Central Office staff arrived to implement a values-based recruiting model already used in successful revival efforts at other Alphas (chapters). A cornerstone of the model is an interview that determines if a prospective member is aligned with the Chi Psi values of academic excellence, community engagement and gentlemanly behavior.

“The effort resulted in the initiation of 43 new brothers and three alumni initiates, and the awarding of a charter as an Alpha in less than 30 weeks, which is record time for any Chi Psi colonization effort,” said Sam Bessey, national executive director of the Fraternity.

Those recruiting efforts have resulted in a growing fraternity recognized for excellence by the university and the national Chi Psi organization.

Paris-Yates Chapel will host the Service of Thanksgiving and Dedication beginning at 11 a.m. followed by an 11:30 a.m. Ribbon Cutting at the Lodge.

Features of the new house include:

•Johnson Hall, a 1,065-square-foot chapter room for meetings and events, with guest bathrooms

•The basement features a TV lounge and a large conference room.