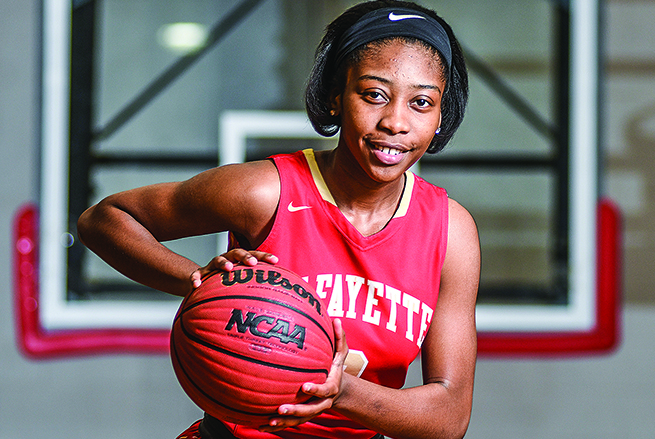 If Lafayette’s girls basketball team was going to have a special season, they would need their key player in Shaniyah Buford to have one of her own. She did and the Commodores erased a 35-year championship drought, defeating Ripley for the MHSAA Class 4A state championship for the program’s second state title.

It was Buford’s leadership on and off court, as well as her play on it, that helped her earn the distinction of being the 2017 EAGLE Player of the Year.

Scoring was not an issue for Buford, who was the only Lafayette player to average double figures with 18.8 points per game. The next closest on the team averaged nearly 10 points less than Buford. She also pulled down 2.8 rebounds, three assists and 2.2 steals per game. Buford scored 618 of Lafayette’s 1,918 points this season, accounting for 32.2 percent of the Commodores’ offensive production.

“I thought (Buford) did an excellent job leading the team on the court and off the court,” Lafayette head coach Shayne Linzy said. “Once again, she’s not very vocal, but she put it on the floor every night this year. When other kids see that, not just the kids that are playing, but as coaches we want our junior high kids, our senior high kids to see, ‘Look what she does and look how she does it.’ It does separate her from a lot of other people.”

The 5-foot-9 senior did not have a very large presence physically on the court and for most of her career did not have a very vocal presence in the locker room. That changed this season when Buford realized if Lafayette was going to reach the mountain top of 4A girls basketball, she was going to have to get out of her comfort zone. During practices and in games, Buford became more of a vocal leader than just the lead-by-example approach she had been using the years prior.

“I knew that this being my last year that they expected me to be a more vocal leader,” Buford said. “They were going to need me to be more vocal to win a state championship. … It was kind of hard, but whatever it takes for my team to be successful.”

Getting Buford outside of her comfort zone as a leader may be proven to be more difficult this season if last year’s season had not ended the way it had. Lafayette made it to the quarterfinal round in Jackson where they faced Florence at Jackson State University. It was a game where Lafayette had a berth to the semifinals well in hand until a late flurry by the Eagles propelled them past the Commodores in overtime. Florence would eventually go on to win the state title.

It was a feeling that stuck with Buford and the rest of the returning Commodores, fueling what became a championship run this year.

“It stayed in the back of my mind the whole summer,” Buford said. “We just reminded each other that the feeling we had, we didn’t want to feel like that no more. … It feels good (to win the championship), it’s been a long time. I’m just proud to finally get to hang up another banner (in the gym).”

Buford has not decided on a destination to play basketball at the next level but has already started looking. She visited East Mississippi Community College last week.

Lafayette
The Commodores’ run to the gold ball was not solely relied upon by Buford, though she did not hurt their chances, but it took a herculean effort from all starters. Two Commodores that were the most helpful were sophomore Mariah Holland and freshman Azariah Buford, who join Shaniyah on the All-Area Team.

Holland was the next best scorer for Lafayette, averaging 8.5 points per game, while Azariah was third-best with 7.7 points. Holland finished with a team-best average of six rebounds a game.

“It got to where Mariah has really got a feel for the ball,” Linzy said. “She knows where a rebound is going to come down. She can jump that extra inch when she has to. … She really worked hard and takes pride in it. (Rebounds) is not a stat that in a sense changes the scoreboard, but it does. Offensive rebound, putback. There’s two points right there. Defensive rebound, well there’s two less points for the other team. Mariah did a great job for us.”

For Azariah, it was a season where she was slowly taking the torch from her cousin Shaniyah as well as provided a 1-2 punch offensively. If she was not the one doing the scoring, Azariah was making sure her teammates were with a team-best 4.2 assists per game. She also created extra offensive opportunities, averaging nearly four steals a game (3.9). Azariah also pulled down 5.2 boards a game.

“We were real fortunate this year,” Linzy said. “When you got Shaniyah and Chelsea (Allen) as guards out there, being able to play a freshman knowing those other two girls are going to graduate and get her that experience and also make her comfortable. Next year, she’s going to have to handle the ball even more so. She proved herself last spring and really in the last few ballgames of last season that she could handle it and was ready for it.”

Oxford
It was a year of unexpected adversity for the Chargers, losing two seniors for the season in Taliyah Gross and Tiara King to a car wreck just days before the season began. It made a roster that was already filled with youth even younger before the first tip of the season.

It put pressure on the juniors as well as causing a necessity of the underclassmen to step up quicker than head coach Cliff Ormon anticipated. Junior Jordan Freeze and ninth-grader Caliya Toles did just that, earning themselves spots on the All-Area team.

“Jordan’s role was totally different going into this season anyway and it totally changed once we lost Tiara,” Ormon said. “Ball handling was not something she was having to do a lot, then she kind of had to help take over that role with other players in figuring out a way to just get into our offense. I thought that she played really hard all year.”

Ormon and his staff knew Toles was going to have to have a larger role and saw the potential in her. It showed in the stats as well with her scoring 5.1 points a game and pulling down a team-best 7.8 rebounds per game. She also averaged one assist and nearly four blocks a game with 3.9.

“We knew (Toles) had potential to get on the court if she would really work,” Ormon said. “As the year progressed, we knew she had taken a step, but we didn’t know she was going to be the starter every game. She really developed as the season went on.”