Ole Miss working to get physical in red zone 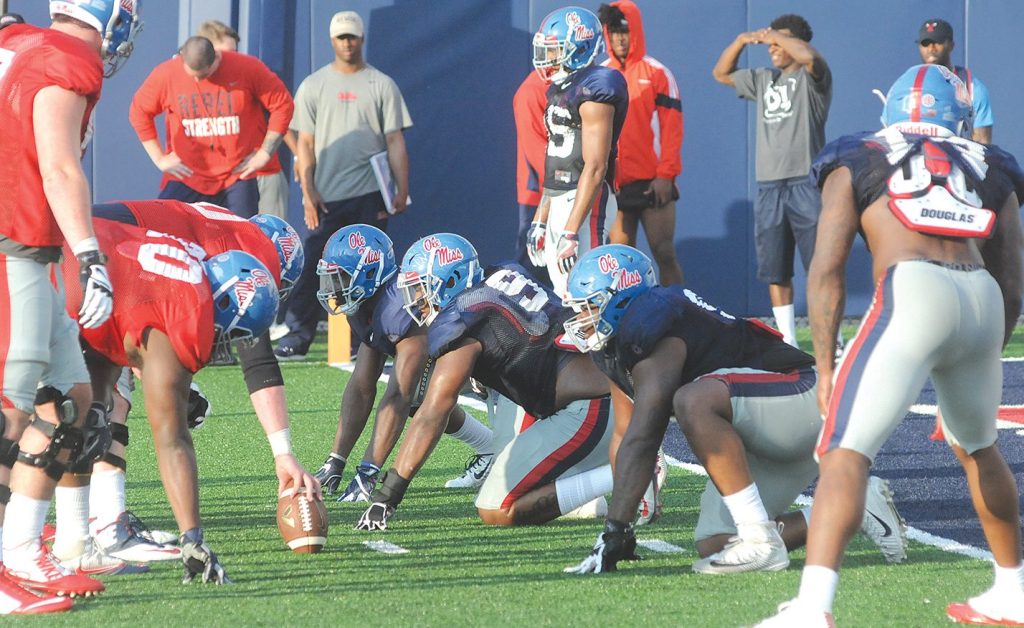 Ole Miss offensive and defensive linemen line up for a play during the red-zone portion of practice Tuesday in Oxford. The Rebels are emphasizing physicality near the goal line this spring with both sides of the ball struggling in that area last season. (Davis Potter)

Ole Miss’ red-zone offense was bad last season, and the defense was worse.

The first step in trying to improve both, head coach Hugh Freeze believes, is a more tenacious mindset the Rebels are trying to develop on both sides of the ball this spring.

“We’ve got to become a more physical defense. Period,” Freeze said. “And the offensive line has got to be real physical down there.”

Short-yardage and goal-line packages are making up the final phase of installation for first-year coordinator Phil Longo’s offense with an emphasis on the physicality increasing near the end zone. Freeze said the defense pushed back and “really dominated” the scripted portions of Tuesday’s goal-line practice, forcing the offense into some penalties and a turnover, while the offense responded during the non-scripted portions.

“Those are the exact things we talked about in here that had to be the emphasis,” Freeze said. “You’ve got to get points when you get down there, you can’t have negative plays and you certainly can’t turn it over.”

Teams didn’t get much resistance near the goal line a season ago from the Rebels’ defense, which was 126th out of 128 FBS teams in red-zone defense. Ole Miss allowed opponents to score nearly 94 percent of the time and yielded a Southeastern Conference-worst 25 rushing touchdowns in the red zone.

Ole Miss scored 84 percent of the time it got inside an opponent’s 20-yard line last season, but only 54 percent of its trips (31 of 57) ended in touchdowns. Most of those came through the air as the Rebels had just 13 rushing touchdowns in the red zone, second-fewest in the SEC.

Ole Miss often used 230-pound backup quarterback Jason Pellerin’s legs in short-yardage situations last season, particularly the closer the offense got to the goal line, but Pellerin, who’s been doubling as a tight end this spring, didn’t take any of those snaps Tuesday. Whether that’s still a thing come the fall remains to be seen, but Longo’s new-look offense has a short-yardage identity it wants to form regardless of who’s got the ball.

“We just kind of present it differently, but the expectation is that we’re going to be extremely physical,” Longo said. “We’re going to be quick off the ball, we’ve got to move some people, and we’ve got to win the physical battle within a 3-yard area. That’ll be our focus every time we go short-yardage and goal-line (packages) in practice.”

Said junior guard Jordan Sims, “It’s like Coach Longo was saying. We’ve got to go out there and learn how to finish drives.”

Freeze admitted the defense’s success was partly because some of the offense’s plays were scripted, but finding consistent success near the goal line is a work in progress for both units.

“We’ve got a lot of things to clean up from the tight red-zone portion of practice,” Freeze said.