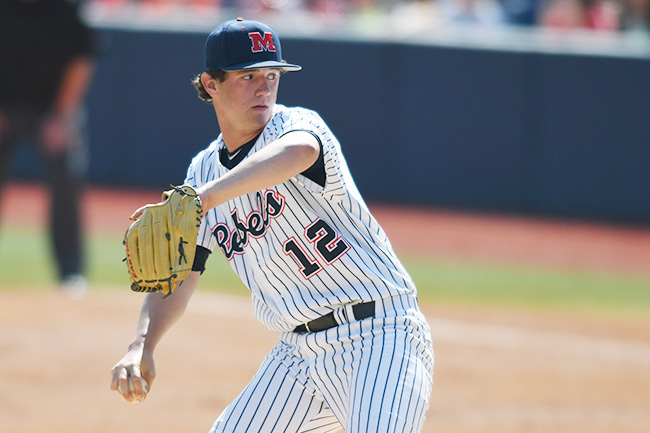 PEARL — Freshman pitcher Jason Barber stepped up the plate in the 12th inning before scoring the winning run on a wild pitch and completing Ole Miss’ comeback victory over No. 17 Southern Miss Tuesday night at Trustmark Park. The Rebels (17-12) rallied from a four-run deficit, scoring once in the ninth to force extra innings and winning their longest game of the year, 6-5.

With Ole Miss out of position players, Barber was hit by a pitch in his first career at-bat. While he scored the winning run, redshirt freshman Carson Klepzig tied the game in the bottom of the ninth on a passed ball.

Ryan Olenek went 3-for-6 with a double as Ole Miss pounded 11 hits throughout the night. Eight other Rebels recorded hits as well. The Ole Miss bullpen tossed 7 1/3 innings without allowing an earned run as Dallas Woolfolk (2-1) collected the win by pitching two scoreless innings of relief.

Southern Miss played small ball to score the game’s first run in the top of the second. After the leadoff hitter was plunked by a pitch, back-to-back sacrifice bunts moved him to third. With a fielder’s choice on one of the sacrifices, the extra out allowed a grounder to shortstop to plate the Golden Eagle. Two innings later, USM used a pair of hits and two more sacrifice bunts to add to its lead and make it 3-0.

The Golden Eagles added another run in the fifth, but the damage was limited thanks to an outfield assist by Will Golsan. On a shot to right that bounced off the wall, the junior made a perfect relay to Tate Blackman, who threw across the diamond to third. The relay was in time to prevent a triple and wipe a runner off the basepath. A double on the next at-bat would have scored the run, but the play by the Ole Miss defense kept the difference at four runs.

Ole Miss got the run back in the bottom half of the inning. Olenek doubled down the left field line before crossing the plate on a base hit to right by Golsan. The RBI single put the Rebels on the board and brought the deficit back to three, but USM countered with a run in the top of the sixth.

The Rebels answered with a big sixth inning of their own. Thomas Dillard started off the frame with a single to center before stealing second to get into scoring position. A Grae Kessinger single followed by a double to the center field wall by Blackman scored Dillard, and Colby Bortles hit a fly ball deep enough to score the Ole Miss shortstop. Completing the three-run inning, Tim Rowe found the gap in left-center field to represent the tying run on second. USM recorded back-to-back outs to end the inning but not before Ole Miss brought the game to 5-4.