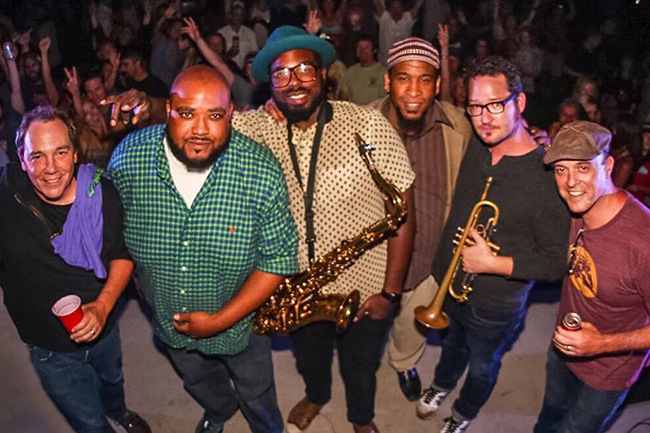 Born in Manhattan; raised in New York City. You would never guess either of these things about John “JoJo” Hermann by listening to his music. This long-time member of the successful “jam” band Widespread Panic began his music career right here in Oxford. It all began at a place called the Hoka.

The year was 1987. JoJo had always wanted to come to Ole Miss to study history, with a concentration in Southern Studies. He came in on a Greyhound bus, met a local named Ollie, who would introduce him to Ron Shapiro. Shapiro was running the Hoka at the time and JoJo desperately wanted to play the piano there. The Hoka was the center of bohemian culture in those days .… showing late-night cult classic films and featuring favorite local bands as well as national acts.

So, the deal was made that JoJo would play some solo piano shows and he would be paid in cheese sandwiches. It wasn’t long before the local band Beanland noticed, and JoJo began his official music career as the keyboardist for the band.

Beanland was one of the most important bands ever to come out of Oxford. With only two albums ever made, they still hold a firm place in the hearts of their fans and in the hallowed halls of Oxford’s music scene. They rose to local fame mainly through their live shows …. playing gigs with the likes of the Tangents, the Hilltops and the Grapes. Beanland originally consisted of Bill McCrory on guitar, George McConnell on vocals and guitar, Ron Lewis on bass and Adam Stoll on drums and harmonica. Eventually, Harry Peel would take the spot on drums, and JoJo joined in on keyboards and vocals. The band has a dedicated following of devoted fans who endured a bittersweet sadness when in 1993, JoJo got the offer to become the new keyboardist for Widespread Panic. But JoJo would not forget his beloved Oxford. He came back quite often in the early days of his Panic career to play impromptu solo shows at Proud Larry’s.

There were also the Beanland Reunions in the late 90s/early 00s, which became so big, for the last couple of years there had to be two shows .… one “invitation only” at Proud Larry’s the first night and one open to the public at The Library on the second night.

Most recently, Jojo played the Ford Center at the University of Mississippi in February 2014. It was much like an episode of MTV’s “Storytellers,” where JoJo introduced each song he played with the history of how it was written, and what it was about. It was the first sold-out show ever in the Singer/Songwriter series held at the Ford Center and a copy of this show can be found on the website PanicStream. It was a most entertaining evening, with JoJo flashing his chops on both vocals and piano, and not missing a single note throughout the whole show.

JoJo’s mainly played his beloved originals such as “Bayou Lena”: a love letter of sorts from a Northern boy to his newly found home in the South .… enjoying the beauty of the women and the landscape of this Southern wonderland he had found; and “Big Wooly Mammoth,” a song Hermann wrote for his main band Widespread Panic.

“I live in Nashville, but my heart’s here in Oxford — no doubt about it,” Hermann said.

Regarding another famous song he wrote, he said “(it was) a sad occasion. It’s a song we played in Beanland back then, called ‘Incestuous.’ It is a song I wrote on 15th Street right across from Faulkner’s grave. It’s called ‘All Time Low’.”

There was a gasp from the crowd. This is a song known well to Widespread Panic fans. JoJo went on to play one of the slowest, mournful and musically sophisticated versions of the song ever to have been played. It was amazing. It has become evident that Hermann has grown exponentially during his many years of practice .… constantly touring, playing and writing music. His voice is sure and steady, with a refinement in his sound that is clear and distinct.

I urge anyone to visit the PanicStream site and listen to this show. The whole show is available for download for free there, along with many other solo JoJo shows, Widespread Panic shows and even some recently played shows with his new band, Slim Wednesday.

The Proud Larry’s show tonight will be streaming live on PanicStream.com, so for those of you who couldn’t get tickets, or just can’t make it to the show, you can join in the fun from the comforts of your own home .… and also download the show for free.

The festivities begin at Proud Larry’s this evening with a Happy Hour Crawfish Boil featuring Kenny Brown playing from 5:30-7:30 p.m. Doors open for the JoJo’s Slim Wednesday show at 8:30 p.m., and the band will begin at 9:30.p.m.

Suanne Strider is an Ole Miss alumni, writer, photographer and retired paralegal who works out of Oxford. She can be reached at suannestrider@gmail.com.