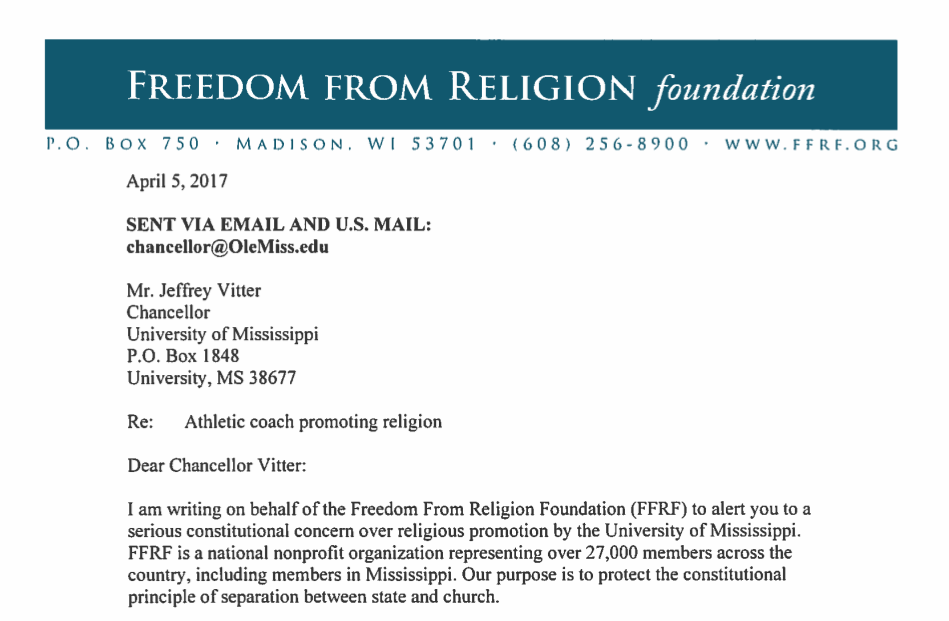 A national foundation that seeks to separate church and state has complained to Ole Miss that head football coach Hugh Freeze and an assistant football coach are wrongly using Twitter to promote religious beliefs.

The Freedom From Religion Foundation (FFRF) sent a letter this week to Ole Miss Chancellor Jeff Vitter questioning what it calls “overly religious social media postings of football coaches at the University of Mississippi.”

“A concerned citizen reported to FFRF that University of Mississippi head football coach Hugh Freeze regularly promotes religion on his Twitter page,” the foundation attorney wrote in a letter sent to Chancellor Vitter.

“Recently, Freeze has tweeted statements such as ‘Lead us by your truth and teach us 2day, for you are the God who saves us! All day long I put my hope in you. Ps 25:5 – be a blessing 2day’ and ‘Here’s the best news ever, your eternal standing with God doesn’t depend on your goodness, but on God’s unshakable faithfulness’ via his twitter handle @CoachHughFreeze.

“Though FFRF respects Freeze’s right to tweet as a private citizen, he may not promote his personal religious beliefs while acting in his capacity as a university employee. The @CoachHughFreeze Twitter handle appears to be an official account used in his capacity as head coach, given the account name and that the university publicizes Freeze’s tweets.”

The Freedom From Religion Foundation is the same group that questioned the role of religion inside the Ole Miss football program back in 2014. The Madison, Wisconsin-based foundation sent a request to the University at that time, and also filed a complaint with Clemson University over what it called “serious entanglements” between its football program and religion.

READ HERE THE OXFORD EAGLE EDITORIAL THAT FREEZE SHOULD KEEP ON TWEETING.

The Washington Post wrote in 2014 about Freeze’s blending of faith and football.

“(Freeze) believes two strong forces, football and his Christian faith, brought him to this point, and within the framework of both parts of his identity, he is able to teach all manner of lessons to young, impressionable men,” the newspaper reported. “He uses his Twitter account to share Bible verses and practice photos, sprinkles praise music into the playlist during practices and believes it’s important to tell recruits and their families he believes in Jesus.”