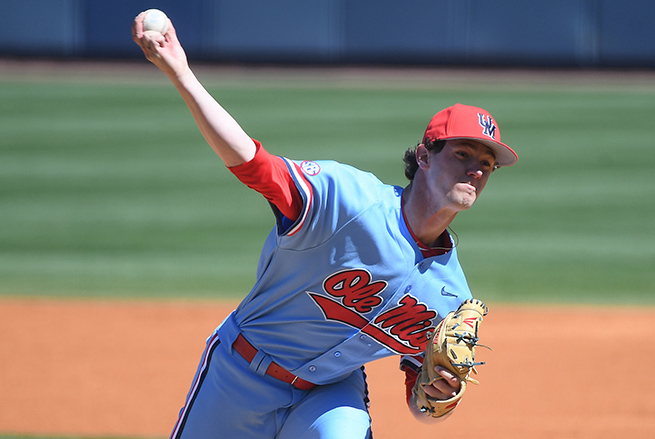 HATTIESBURG — Behind six shutout innings by freshman Greer Holston, Ole Miss took down No. 16 Southern Miss 6-2 Tuesday night at Pete Taylor Park. The Rebels (21-12) defeated the Golden Eagles (26-8) for the second time in as many weeks, earning a season sweep over USM for the first time since 2010 and winning in Hattiesburg for the first time in eight years.

Holston (1-2) held one of the nation’s best offensive teams without a run and surrendered only two hits during his second start against the Golden Eagles. Southern Miss entered the contest ranked in the top 11 nationally in hits per game (10.9), runs per game (eight) and home runs (46). Holston, along with reliever Brady Feigl (1), limited the Golden Eagles to two runs, five hits and no homers. Feigl pitched the final three innings, striking out five, to collect the rare three-inning save.

Ryan Olenek and Nick Fortes both continued their hot hitting with 2-for-4 performances. Olenek recorded a pair of doubles to increase his season total to 11, a team-high, while Fortes added a double and two RBIs. Will Golsan homered for the second consecutive game, hitting a two-run shot in the top of the ninth.

On the mound, in a rematch of last week’s duel with Holston, Taylor Braley (3-1) took the loss after allowing three runs (two earned) on six hits and two walks. Four Golden Eagles tallied hits in the contest with leadoff hitter Dylan Burdeaux going 2-for-4.

Ole Miss will face No. 8 LSU in Southeastern Conference action Thursday-Saturday in Baton Rouge, Louisiana. The first two games will take place at 6:30 p.m. and 7 p.m., respectively. The series finale will be an afternoon matchup slated for 2 p.m.