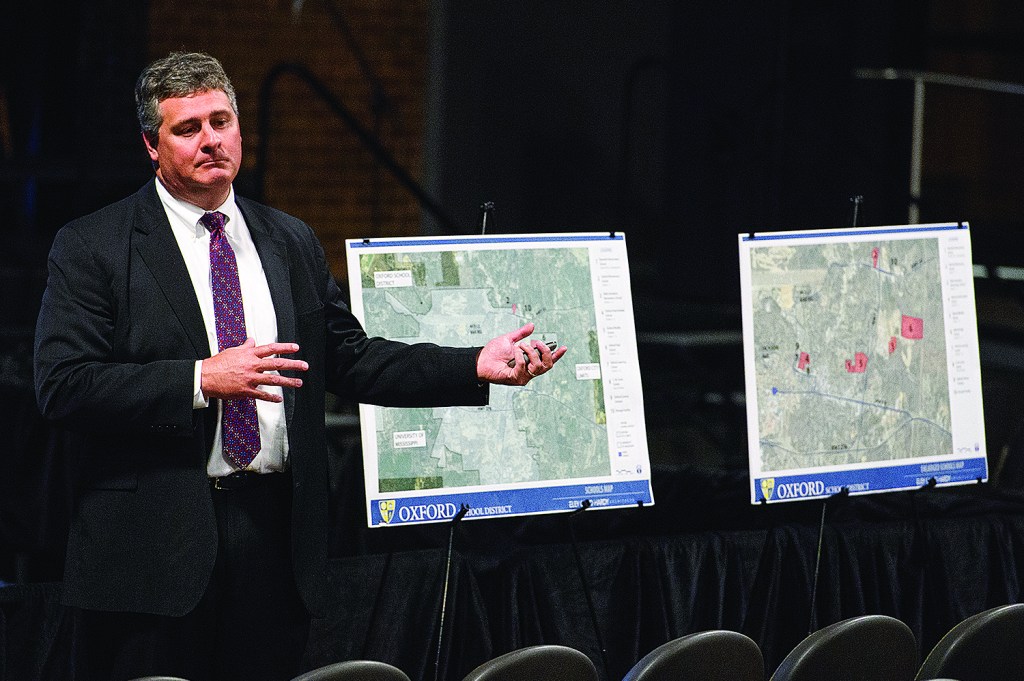 With the increasing number of citizens and births in Oxford, it’s no surprise that the Oxford School District has to make plans to accommodate all of its students.

The Oxford School District held its first meeting Monday with the public to discuss a potential bond referendum for the fall of 2017 for the purpose of constructing a new elementary school.

Brian Harvey, the OSD superintendent, cited a 2012 statistic that Lafayette County had its most births in the past 12 years. He added that this fall, those children will be entering kindergarten.

“The need that’s driving (this meeting) is an elementary school,” Harvey said. “The second reason for this meeting is for the public to provide us with feedback so we can go from there.”

Harvey also addressed some of the current issues with Oxford Elementary School, which is situated off Highway 30.

Aside from transportation and traffic issues entering and exiting the lot, Harvey said, “(OES) is a valuable piece of property. It would be great for a business or hotel. It doesn’t offer any advantages with the logistics issues that it has for a school.”

With the current bond plan, OES would turn into central offices while its faculty would be transferred over to the new elementary school. The new facility would look to accommodate 750 students.

Taylor Guild, of Eley Guild Hardy Architects, was on hand to discuss some of the other possible renovations that could be done to the schools if the bond passes the referendum.

“All of the schools are centrally located in the district, so location is going to be a big issue,” Guild said. “For an elementary school you want 10 to 15 acres. You want to find a sight that’s accessible for traffic, cafeteria deliveries and parents and faculty.”

Susie Adams, an Oxford parent, raised the concern that the town still does not have a fine arts building that was proposed the last time the school passed a bond referendum.

“I think that a lot of people feel that if a fine arts building is not part of this bond issue, then after five years when we have another bond issue there are going to be other schools that need it,” Adams said. “I think it’s going to make it harder to make the bond pass. So many people voted for the last one thinking that it was a performing arts building. I think now there might be a trust issue.”

Harvey responded by saying that it was indeed part of the plan, but that they came in ten million dollars over bid and that, “the plan had to change because we didn’t have enough money to do it.”

The superintendent reminded those in attendance that, “no money has been spent yet, and no obligation has been made.”

He also said that whether or not the board decides to re-zoning option for the schools instead of building a new elementary facility, inevitably the town will have to be re-zoned.

“We will have to have zoned schools,” he said. “There’s no way around it. I think a new elementary school would put that off ten to 15 years … It’s the community’s school and we need everyone’s input.”

Harvey concluded the meeting by welcoming any of the public to leave comments, questions and ideas for a new elementary site on a Web page set up for the bond referendum (www.oxfordsd.org/bondref). The next community meeting will be held on May 1 at 6 p.m.  in the Kayla Mize Auditorium at Oxford Middle School on Bramlett Boulevard.