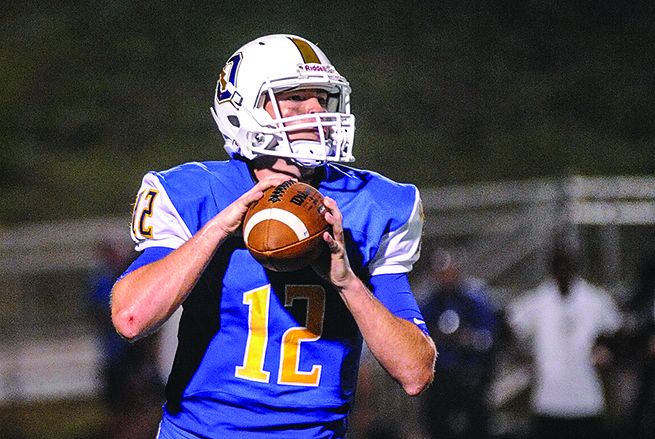 Oxford quarterback John Reese McClure (12) is one of the Chargers who may miss a portion of spring drills as he begins the postseason with the baseball team this Friday. (Bruce Newman)

An abrupt ending to the 2016 season was not something Oxford was used to, having reached three consecutive state championship games prior to last year’s second round ousting by West Point. A 41-0 drumming in the rain ended what was Chris Cutcliffe’s first year as the Chargers head coach, replacing long-time head coach Johnny Hill.

A new spring season is here and Cutcliffe, much like many coaches, is not focused on game planning just yet, but more about what players he will have heading into the Summer and Fall.

“I’ve kind of always gone with the philosophy that spring is about the players and not the plays,” Cutcliffe said. “For us, you want to see what guys can do. I don’t want spring to be about who knows the most plays. Who knows the most schemes we have. I want to evaluate guys on what they can do.”

There will be plenty of opportunities to evaluate players and see who will take advantage of the opportunities that spring practices provide. In Oxford’s case, they lost 23 seniors from last year’s roster, including four starters on the offensive line as well as defensive line. There are also other opportunities available with key players still playing other sports with baseball beginning their postseason run for a third straight 5A state title next weekend. Cutcliffe could be without the bulk of his players who compete on the track team if they qualify for next week’s North Half meet as well as the state meet in Pearl on May 5.

“That’s a good thing. It gives us an opportunity to get some different guys some work,” Cutcliffe said. “Get some young guys who maybe don’t have as much experience, really get them some quality work. Some of them get thrown into a big role right off the bat. Especially if there is an older guy who is not out there in their position. It’s good to see who can handle that.”

The concern of not having everyone on the field at the onset of spring practices is not a concern for Oxford, who returns their leading passer, rusher and receiver on the offensive side. Junior John Reese McClure will be back under center this fall and will have Hiram Wadlington to hand the ball off to and Barry Flowers as one of his primary targets. Defensively, Cutcliffe is returning his leading tackler in senior linebacker Quentin Wilfawn will be roaming the defensive side of the field for Oxford. Wilfawn recorded 171 tackles last season.

“All of them are involved in a spring sport, so I’m excited to see who will step up in those spots,” Cutcliffe said. “I’m excited to see the (offensive lineman group) and the competition with where we are with that group. You want to see where we lost some quality seniors last year and who can step up.”

Oxford will wrap up spring practice with a spring game against Amory on May 12 at 7 p.m. at Bobby Holcomb Field. The game could get moved to May 11 if baseball is hosting Game 1 of the North Half championship series on the same night.