The Square in Oxford is Double Decker ready 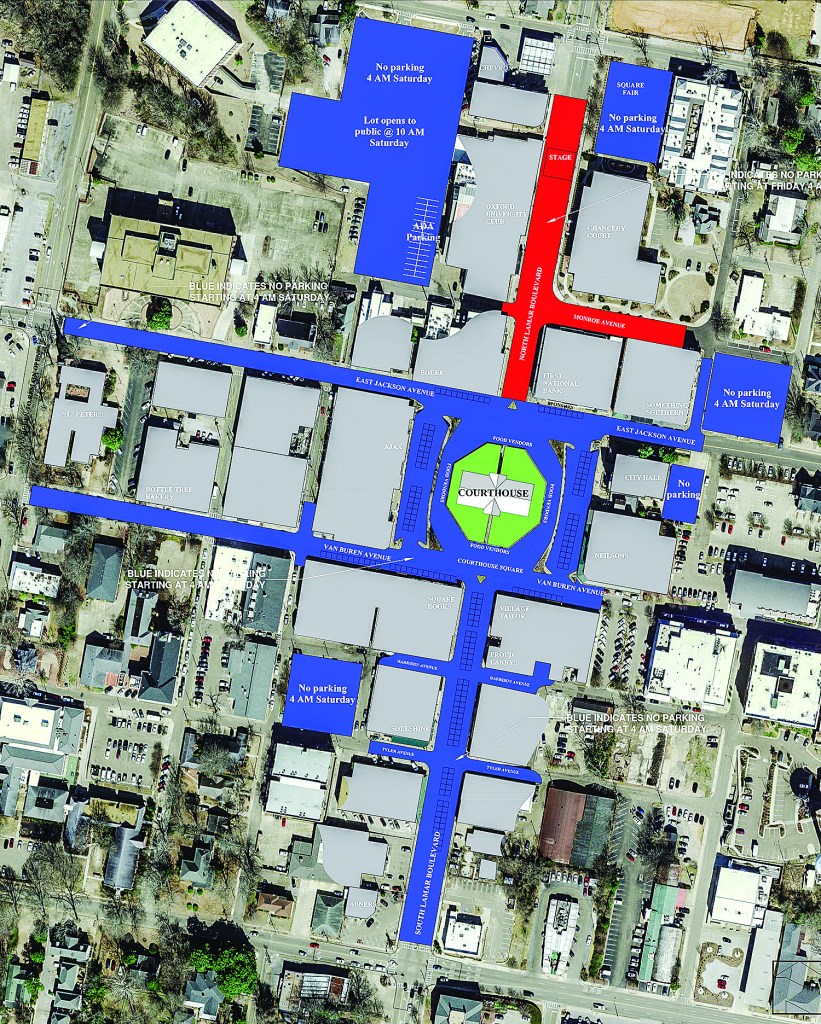 With Oxford getting ready for this year’s Double Decker Arts Festival this weekend, streets around the Square will start to be down to traffic starting at 4 a.m. Friday.

The road is closed to allow for crews to build the stage for this weekend’s Double Decker Arts Festival.

“Our goal is to be proactive in preventing any disturbances or unsafe activities and as always do not hesitate to contact us should the need arise,” he said in a written statement Thursday.

This year’s 22nd annual festival will feature the same great food, music and art that has made the event one of the most popular in north Mississippi, and some could argue one of the best attended in the state of Mississippi with crowds that top 50,000 in past years.

Now a two-day event, the festival has become a regional tourist attraction that brings in visitors from hundreds of miles away. Yet, it has also managed to retain the local festival vibe, and it’s still a place where people come each year to see familiar friendly faces, listen to great music, buy some one-of-a-kind art and sample Oxford’s well-known food offerings. The festival is named after the town’s authentic double-decker buses imported from England in 1994. Oxford now owns a total of four double decker buses.

This year’s Friday night concert will again take place in conjunction with Thacker Mountain Radio Hour and will be free and open to the public. This will be the fourth year for the partnership between Thacker and the festival.

The show will be held on Ole Miss Athletics stage on North Lamar starting at 6 p.m. with “Bentonia” blues artist Jimmy “Duck” Holmes. Thacker Mountain Radio Hour will begin at 7 p.m. The Muddy Magnolias, an indie rock band, will close the show at 8 p.m. and perform for about an hour.

Saturday’s headliner will be Nathaniel Rateliff & the Night Sweats.

Before Rateliff takes the stage Saturday night, the day’s musical entertainment will begin at 10:15 a.m. with The Mississippians Jazz Ensemble. Other featured musicians for the weekend, including Seratones, Luther Dickson and Dr. John and the Nite Tripper, who will be the last band before Rateliff performs.

All music will be performed on the North Lamar stage, sponsored by Specialty Orthopedic Group.

This year’s presenting sponsors for the festival are the University of Mississippi Museum and Ole Miss Athletics.

In addition to music, there will be more than 165 art vendors from around the region selling creative wares for the anticipated 60,000 festival attendees. Selected by Oxford’s Yoknapatawpha Arts Council, the vendors include drawings, glass, jewelry, mixed media, painting, photography, printmaking and sculptures.

This year’s food court will feature a sampling of culinary treats from local restaurateurs who will offer special menu items that are unique to the Double Decker Arts Festival.

Saturday activities will kick off at 7:30 a.m. with the Oxford-Lafayette County Chamber of Commerce Spring Run 5k walk and 10k run.

Winding through the University of Mississippi campus and nearby Oxford neighborhoods, the two courses are fun for both beginner joggers as well as experienced athletes. There is also a Kid’s Run at 9 a.m.

On Sunday, at 3 p.m., a Gospel Showcase, benefiting the Good Food For Oxford Schools organization will close out the busy weekend.

Spoon to play the Lyric in Oxford Friday night