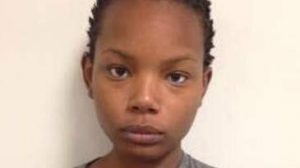 A woman charged with helping her alleged boyfriend and another man after they killed two Hattiesburg police officers has been found guilty and given the maximum sentence.

Joanie Calloway, 24, was sentenced to a total of 25 years in prison for attempted accessory after the fact of capital murder and five years for hindering prosecution in connection with the shooting deaths of Hattiesburg police officers Benjamin J. Deen and Liquori Tate in May 2015.

After two days of testimony that began on Tuesday, the jury went into deliberations at about 3:07 p.m. after the defense and prosecution both rested their cases.

At 4:01, the jury returned, finding her guilty on both charges.

The defense was granted a change of venue for the trial claiming they would not be able to get an unbiased jury in Hattiesburg and the trial was moved to the Lafayette County Courthouse.

After the prosecution rested its case Wednesday morning, defense attorneys for Calloway announced they would not be calling witnesses.

“I want to apologize to all parties,” she said quietly, facing the judge.

Helfrich immediately imposed Calloway’s sentence, denying a request from defense attorneys to suspend sentencing until after a presentencing hearing.

The Hattiesburg American reported that during Calloway’s trial, jurors were shown police dashcam video of Deen approaching the car and speaking to Calloway. After the officer asked Calloway for ID, she told him she was on her way to work. She then gave him a Social Security number and a military identification card that turned out to be her husband’s.

After Deen called for help, Tate arrived as backup.

The video showed Calloway getting out of the car at Deen’s request, and Tate trying to get Banks out of the car. Banks got out with his hands up, then reached back in the car, grabbed a gun and began firing.

Deen was shot in the face; Tate, in the lower back. Both officers were wearing bullet-resistant vests that couldn’t protect them against the gunshots.

The video showed Calloway getting back in the car and yelling, “’’Marvin! Get in the car! Marvin! Marvin!” She drove away when he didn’t respond. The footage showed Banks getting into the police car and driving away.

She later was picked up by police, but in several interviews she would not give them Banks’ real name, saying she didn’t know him even though the two were in a relationship, Hattiesburg police Lt. Latosha Myers-Mitchell and Mississippi Bureau of Investigation Sgt. Trent Weeks said in testimony Wednesday.

The state played a video of Calloway’s interview with Weeks, when she kept insisting she did not know Banks.

However, Banks’ best friend Aaron Thomas testified Calloway was with Banks three to four days a week for at least six months and sometimes the couple would spend the night at his house.

Calloway was charged with trying to help Banks flee and with misleading police about Banks’ identity. Banks died of heart disease in 2015 while in jail. He was 29.

Marvin Banks’ brother, Curtis Banks, 28, was accused of trying to hide him from authorities. Curtis Banks pleaded guilty to accessory after the fact of capital murder and is serving a 20-year sentence.

Calloway was the first person to go on trial in the killings. Five others have also been charged for various roles after the shooting and are awaiting trial.

Several Hattiesburg police officers attended the trial to show their support for the fallen officers and their families.