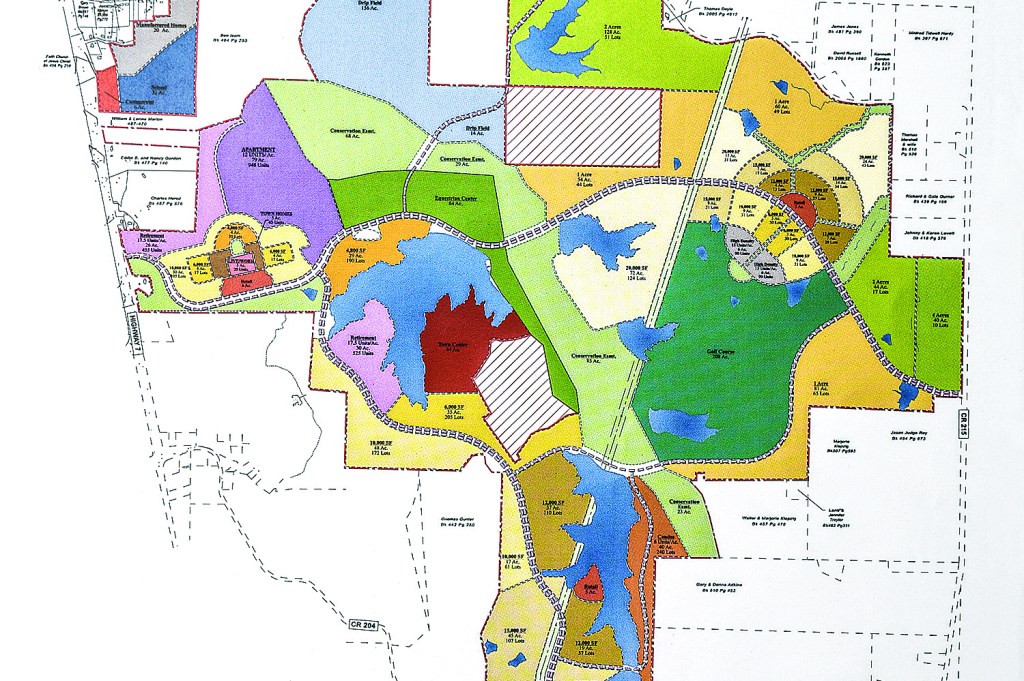 The overall land use map for Oxford Springs received approval from the Lafayette County Board of Supervisors Monday evening, but one supervisor made it clear he has unanswered questions about the massive development just south of Abbeville.

Prior to approving the land use map, Supervisor Kevin Frye said he is excited about the possibilities of Oxford Springs; however, he is worried about several items he pointed out on the land use map, which is a guide to what developers Lamar Adams and Patrick Sands intend to build on the 2,600-acre site.

“There are so many exciting things going on here,” Frye said during the discussion about the development. “I’m excited about new development in the county, but on the other hand, you look at 17 units per acre when our current maximum is four units per acre. If they’re going to move forward with the concept like that, we’re going to have to have some real discussions about how our existing rules conform or don’t to what they’re looking to develop.”

Frye said he realizes the county is working on updating a comprehensive plan so some regulations may change and that the Oxford Springs land use is a long-range plan. He’s concerned that the county won’t be able to provide services to such high-density areas in the development.

“What does 17 units per acre look like? If it’s a six-story building, do we even have ladder truck at the fire department that could put out a fire?” Frye asked. “I counted up 4,731 units. I don’t know what the sheriff thinks about 4,731 houses north of town and if he has enough manpower to handle that.

“My concern is that a developer comes to us and says ‘Hey, we’d like for you to approve this’ and we tell them our regulations are four units per acre and they bought something with 17 units,” Frye said. “I just don’t want us to be in a place we didn’t intend to be down the road because we didn’t raise these concerns.”

He’s also curious about the number of miles of road in the development and who will maintain the roads, but he’d also like to know what Abbeville officials think about the project and how the mixed-use development might impact their community.

“The county doesn’t collect sales tax. All we get is ad valorem tax,” Frye said. “Were this to be annexed by the town of Abbeville, they would be able to generate some additional revenue they could help pay for some of these services I’m talking about.”

“It just seems to me that before we say ‘go for it,’ I don’t want them to think it’s a green light that everything that’s on this map is going to get approved as it comes up,” Frye added. “What we’re looking at on this map is a town.”

County Engineer Larry Britt stated that supervisors were not approving anything other than the conceptual drawing of the development. The developers will have to come before the board during each phase of the development to receive approval.

Architect Cory Alger, who was not at the meeting, has stated in previous meetings with county officials about the project that the development would be over a 15-20 year period.

Abbeville Alderman Jerry Pope, who was in attendance, said the town water system could currently provide water to 65 units the developers have asked for.

“They’re just going to tap into our existing system, which will support it,” Pope said. “We have agreed to allow them to tap on at their expense and we will service them.”

The board approved the land use map with the stipulations that some of the concepts are not currently allowed by their regulations.

•Approved a variance setback, as well as preliminary and final commercial site plan for Keel Communications to replace an existing satellite tower near Highway 30 with an updated tower.

•Approved a variance setback, as well as preliminary and final commercial site plan for North East Mississippi Electric Power Association for expansion of facility near Highway 30 and Highway 7.