Oxford scores 18 unanswered runs to eliminate Lewisburg, advance to 5A North Half series 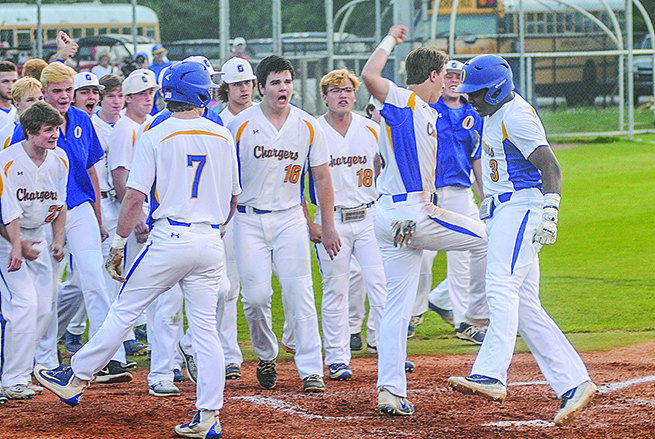 Ridgeland ‘poked a bear’ 10 days ago in Oxford’s Game 2 win of their second round playoff series. In Game 3 of their third round series on Monday night, Lewisburg may have done something more egregious to the Chargers and possibly made the remaining teams very nervous.

After taking a 7-0 lead in the second inning, Oxford’s bats found their mojo and scored 18 unanswered runs in a 18-7 victory to run-rule the Patriots in five innings and send Lewisburg out of the playoffs at Edwin Moak Field. The Chargers advance to their third straight Class 5A North Half series, beginning on Thursday where they will host New Hope, who defeated Germantown 8-5 in their Game 3 on Monday night, in Game 1.

The offense was in short supply in Saturday’s Game 2 with Lewisburg winning 2-1 to force Monday’s do-or-die Game 3. It was the exact opposite in the rubber match, with a total of 14 runs being scored second inning.

Things looked bleak for the two-time reigning and defending 5A state champions as Lewisburg got the scoring started early with a lead-off home run by center fielder Bryce Brock on the second pitch from Chargers’ starter Reed Markle to make it 1-0 Patriots after the first inning. The leadoff batter in the second-inning was just as unkind to Markle with catcher Tanner Booth hitting a home run to make it 2-0. The Patriots would score five more runs in the top half of the second, including another home run, this one by right fielder Landon Rogers for the 7-0 deficit to knock Markle out of the game.

Markle went 1.2 innings, giving up seven runs, six earned, off five hits while walking one and striking out two Lewisburg batters and also had to work around an error by second baseman Sam Bianco in the second inning. Tyler Smith came in for relief and worked 3.1 innings of shutout baseball, giving up only two hits and walking four while striking out three.

“You got to give (Lewisburg’s) kid’s credit. They came out and fought,” Baughman said. “They did a good job against Reed. He threw some pitches that weren’t bad pitches. … A lot of it bad luck. Then Tyler came in and just shut them down.”

Baughman told his players ‘don’t quit’ when they came back into the dugout with a seven-run deficit and to not worry about about getting all seven runs back in one inning. The Chargers were having none of it as they did the opposite of that in the home half of the second inning. Left fielder C.J. Terrell got the inning going with a one-out, two-run home run to cut the Lewisburg lead to 7-2. Bianco made up for the error in the top of the frame a two-RBI single to cut the lead down to three. Third baseman Carson Stinnett followed with a wall-ball RBI double to make it 7-5. Three runs later and Oxford took an 8-7 lead into the third inning.

The offense carried the momentum into the the bottom of the third, scoring 10 runs for the winning margin.

“They’re very deceptive,” Baughman said of his offensive potential on paper. “By this time of year everybody knows you can swing it a little bit. They just woke up.”