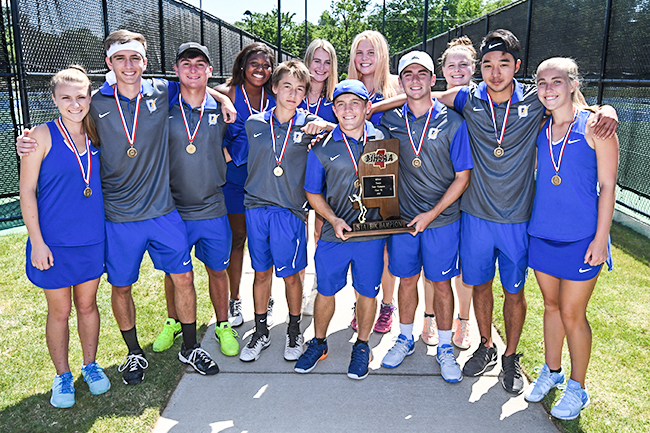 No matter how you cut it, 10 consecutive state championships in any sport is a big deal. To Oxford High tennis coach Louis Nash, it is just another day’s work. The Chargers defeated Stone County, 7-0, in the MHSAA Class 5A state championship at FNC’s John Leslie Courts on Monday morning to complete their decade of dominance.

In what has been the case with most of their matches the past 10 seasons, Monday’s title match with the Tomcats was swift and very one-sided. The Chargers had the winning four points clinched within the first 45 minutes of the match beginning.

It was a clean sweep with all seven matches, with six of them coming in straight set victories. In the singles competition Bo Nash defeated Stone County’s Nick Alexander 6-0, 6-0 while Grace Anne Jones defeated Anna Stringer with the same score.

The mixed doubles team of Ryan Mounce and Hailey Lowery defeated the Tomcats duo of He Feng Du and Lainny Cunningham with a 6-0, 6-1 score. The clinching point came from the boys doubles match of Gordon Whitwell and Max Mauney who defeated the team of Trey Wedner and Will Ladner 6-0, 6-1.

“Solid. Solid, especially in the first five (matches) off,” Nash said. “I thought they were focused. I thought once we got up 5-0 and the two girls matches were left. You lose a little adrenaline.”

In the girls doubles, Amanda Lowery and Anne Hardy won their match over Koda Shaw and Noella King, 6-1, 6-1, while Claire Stevens and Olivia Williams had to go three sets before defeating Stone County’s Kaylen Bond and Emily Luke.

It was the second season that John Leslie Courts hosted tennis championships with Class 4A and Lafayette head coach Debbie Swindoll hosting the inaugural championship matches in 2016. This was a dream of Nash’s to eventually have a tennis complex good enough that the MHSAA would award them with hosting and eventually being able to win a state title in their own backyard. On Monday, that dream was realized.

This was Oxford’s final championship in Class 5A for the foreseeable future with the Chargers moving up to 6A this fall. The raise in competition does not deter Nash from thinking title No. 11 will be theirs for the taking next May.

“We’re about at the mark,” Nash said.