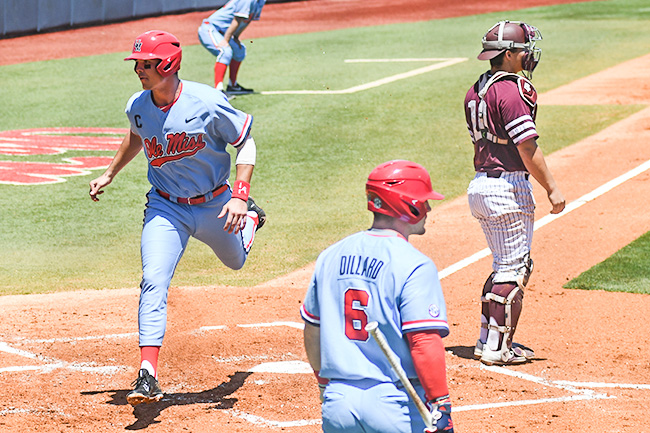 Ole Miss’ Colby Bortles scores while teammate Ryan Olenek is caught up in a rundown between first and second base vs. Texas A&M at Oxford-University Stadium in Oxford, Miss. on Sunday, May 14, 2017. Ole Miss won 6-3. (Bruce Newman, Oxford Eagle via AP)

If Ole Miss ends up making the NCAA Tournament, the last 11 innings will be a big reason why.

David Parkinson had his longest outing in a month, keeping Texas A&M’s bats at bay until Ole Miss’ offense broke out late as the Rebels clinched the series with a 6-3 win Sunday afternoon at Swayze Field. The win got Ole Miss a game within .500 in Southeastern Conference play a day after the Rebels rallied for four runs in the eighth inning to even the series.

“A win yesterday, it helped us stay positive and stay confident, which is good,” said outfielder Ryan Olenek, who had three of the Rebels’ nine hits and drove in a run. “But we come into every game thinking we’re going to win. Confidence really wasn’t the issue. It was just playing well.

“Every series is a must-win series.”

With time running out to improve its NCAA Tournament resume, Ole Miss (31-21, 13-14 SEC) improved to No. 32 in the RPI with the series win and picked up its 10th top-50 RPI win in the clincher after being swept at Florida last weekend. The Rebels will wrap up the regular season at Auburn next weekend after a midweek trip to Arkansas State on Tuesday.

Ole Miss ran A&M starter Stephen Kolek (3-3) after 4 2/3 innings, drew seven walks against four A&M pitchers and put a runner in scoring position in each of the first seven innings but only led 3-1 going to the eighth. Before Tate Blackman and Colby Bortles produced the Rebels’ last three runs with home runs in the frame, Ole Miss went 1-for-16 with runners in scoring position and stranded 11 runners.

“We weren’t good (with runners in scoring position), but we kept the pressure on,” Bianco said. “In doing so, you’re able to get to the bullpen, you’re able to change some people, and I think that helped us getting the starters out of the game.”

Parkinson (6-3) worked out of a couple jams to keep the lead in his longest outing since pitching 6 1/3 innings against LSU on April 14. A&M (35-17, 15-12) got to the junior left-hander for its first run on Logan Foster’s RBI single in the third, but Parkinson recorded back-to-back strikeouts to leave the bases loaded. He walked a pair in the sixth before getting Blake Kopetsky to fly out to escape further damage.

It was the final inning for Parkinson, who had allowed 11 earned runs in his last three starts while not going deeper than 4 2/3 innings in any of them. He scattered five hits and struck out five while working around three walks.

“I think the biggest thing for me was just trying to win pitches,” Parkinson said. “I think that’s one thing that I’ve always kind of had an issue with is that I’ve tried to do too much rather than keep pitching with what I’m doing. Coach B has really nailed that into my head and made me realize that I’ve just got to keep winning pitches, hitting spots and getting people out.”

Said Bianco, “It was a performance we kind of needed and were kind of due for with the way we’ve pitched all year.”

Will Stokes pitched an inning of one-hit relief. Dallas Woolfolk came on in the eighth and gave up a solo home run to Jorge Gutierrez and an RBI single to Nick Choruby after an error in the ninth before nailing down the six-out save.

Designated hitter Tim Rowe was a late scratch from the lineup with a pulled hamstring but pinch hit in the seventh. Bianco said Rowe’s status is day-to-day.