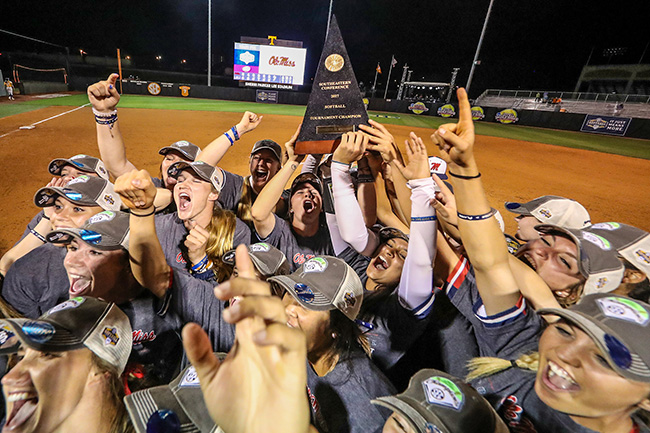 Raise your hand if you followed Ole Miss softball before the last two weeks. Now keep it up if you went the whole Southeastern Conference Tournament without having to pull up the team’s roster.

Unless you’re actually involved with the program, put your hand down. Because we both know you’re lying.

I recently wrote about head coach Mike Smith’s three-year turnaround in Oxford that’s resulted in Ole Miss, as the No. 12 national seed, hosting its first-ever NCAA Tournament regional this weekend, and even I had to refer to the school’s athletics website to make sure I was spelling names correctly. It was the first softball piece I’d written this season — and one of just a handful I’ve written in the three and a half years I’ve been here — because frankly there hadn’t been enough interest to justify regular coverage.

I’ve written more since the Rebels made that improbable run to their first-ever Southeastern Conference Tournament championship, and readers have eaten it up. In fact, articles about the softball team have generated some of the most page views on our website over the last week.

“Being able to win the SEC? Never in my wildest dreams in three years,” Smith said.

Ole Miss raised some eyebrows with its strong finish to the regular season, which included a sweep of then-No. 11 LSU and the program’s first series win over then-No. 13 Alabama, before sending shockwaves through the college softball world Thursday when it took down the sport’s Goliath in No. 1 Florida. After finishing off LSU late Saturday night to become the lowest seed in SEC Tournament history to win it all, the Rebels were the talk of it.

ESPN and the SEC Network couldn’t do enough interviews with Smith and his players. Social media blew up to the point that former Team USA pitcher Jennie Finch, who, if you’re unaware, is arguably the most famous softball player of all-time, gave a shoutout to Ole Miss pitcher Kaitlin Lee in a tweet to her nearly 171,000 Twitter followers.

“When you get Jennie Finch tweeting you in the middle of a game,” Smith said, “that’s pretty impressive.”

By the time Sunday afternoon rolled around, hundreds of fans were gathered in the Ole Miss Softball Complex parking lot to greet the team upon arriving back in Oxford as SEC champs. The celebration didn’t stop there as players made their way to Swayze Field during the baseball team’s series finale against Texas A&M, receiving a standing ovation as they walked along the concourse with the championship trophy in tow.

“You kind of go through the whole season and nobody really knows who you are and you kind of get used to that, and then all of a sudden, bam,” Lee said. “It’s like everybody wants to know you.”

It’s what happens when you win big, and Smith’s program is improbably winning bigger than ever.

Smith took over a program in 2015 that had missed the SEC Tournament seven straight years (including the one Ole Miss hosted in 2011) and combined to go 6-42 in SEC play the previous two seasons. Now Ole Miss will play meaningful softball as a home favorite in front of what will be overflowing crowds all weekend with a chance to make some more unexpected noise.

“Uh, no I didn’t (think we’d ever host a regional),” junior shortstop Paige McKinney said. “I didn’t even honestly expect to go to a regional. All we wanted to do was turn this program around. We didn’t know where that was going to be, but here we are now.”

Can Smith do this consistently at a place like Ole Miss? I don’t know, but my guess is he gets a pretty quick contract extension and a raise after the season that keeps him around so he can find out. The Rebels’ recruiting will no doubt benefit from all the winning as Ole Miss has become a buzzword in college softball circles seemingly overnight.

Y'all @Kaitlin00 from @OleMissSoftball is FUN to watch! Love her energy, you can see her love for the game & teammates! #ShineOn

No shortage of storylines heading into Ole Miss’ Pro…