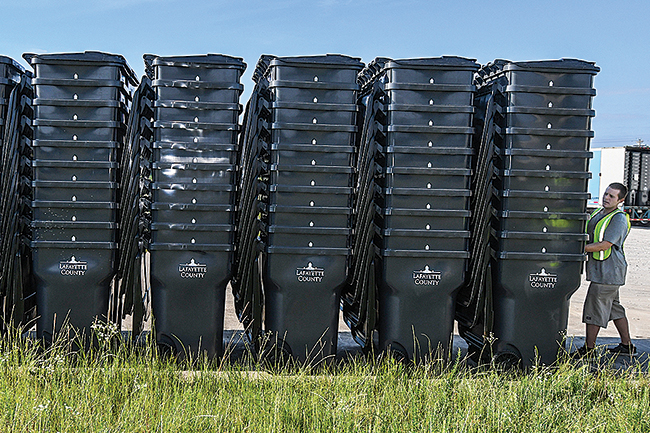 Mike Gary lines up garbage cans as they are unloaded from trucks as workers prepare to distribute them throughout the county, in Oxford, Miss. on Tuesday, May 16, 2017.

“It should take about two weeks to get them all delivered,” he said Monday morning at the Lafayette County Board of Supervisor’s meeting.

The county purchased 10,500 bins for $461,895 earlier this year. Each household will be given one 96-gallon container. Additional containers can be purchased for $6 a month.

“We’re not picking up garbage from any other containers than ours,” Drewery said.

County Administrator Lisa Carwyle said the new containers will be dropped off at each home in the location that the Solid Waste Department wants them to remain.

“Where they’re dropped off, is where each resident should place the container to be picked up,” she said Monday.

The containers are compatible with current garbage trucks, as well as a new garbage truck the county ordered. The trucks have a lever that will grab the can and tip it into the truck.

The new containers include a chip device registered to that home. The chips do not have GPS for tracking them, but they will enable sanitation workers to know which container goes with which home — in case one is stolen, as well as determine which households have paid their monthly garbage bill.

The current garbage trucks will eventually all be replaced with the new automated lift arm trucks that pick up the container and dump the trash into the truck.

Within 30 days after the delivery of the new containers, all garbage bins, 55-gallon drums, or other types of fixed receptacles, can no longer be used and must be removed either by the current resident, or by the Lafayette County Solid Waste Department on request.

The culmination of garbage bags placed into the new containers should not weigh more than 100 pounds.

The new ordinance is available to read online at www.lafayettems.com.

• Approved an easement for a water line for Taylor Water Association for Weems School, pending the final approval by the county attorney.

• Approved the final acceptance of a state aid project on County Road 432.

• Approved a contract for examination services on involuntary civil commitments.