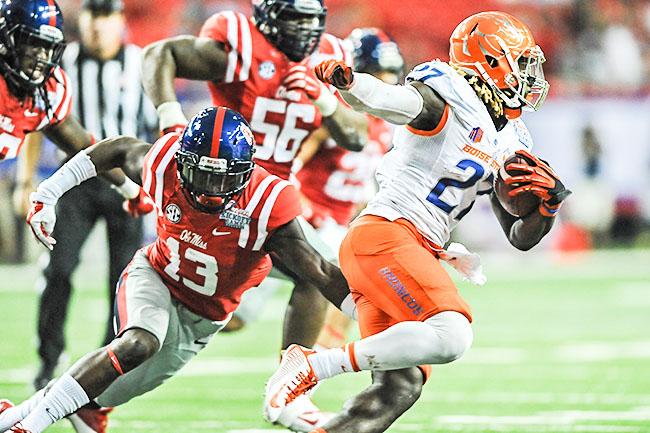 Boise State Broncos running back Jay Ajayi (27) is chased by Ole Miss Rebels defensive back Anthony Alford (13) at the Georgia Dome in Atlanta, Ga. on Thursday, August 28, 2014. Ole Miss won 35-13. Alford, who left Ole Miss to play professional baseball, has been called up to the Toronto Blue Jays.

Alford has been called up to the Toronto Blue Jays’ big-league team and will join the team in Baltimore on Friday. Alford, a native of Petal, played for the Rebels for part of the 2014 season before leaving the program to focus on baseball. He finished with six career tackles.

Alford, a third-round draft pick by the Blue Jays in 2012, began his collegiate career at Southern Miss before transferring.

Ranked the Blue Jays’ No. 3 prospect and the No. 62 overall prospect in baseball by MLB.com, Alford was promoted from the New Hampshire Fisher Cats, the Blue Jays’ Double-A affiliate. He was hitting .325 with three home runs, seven doubles and 18 runs scored as the Cats’ everyday center fielder.

The Blue Jays’ series opener against the Orioles is set for 6:05 p.m. CT.