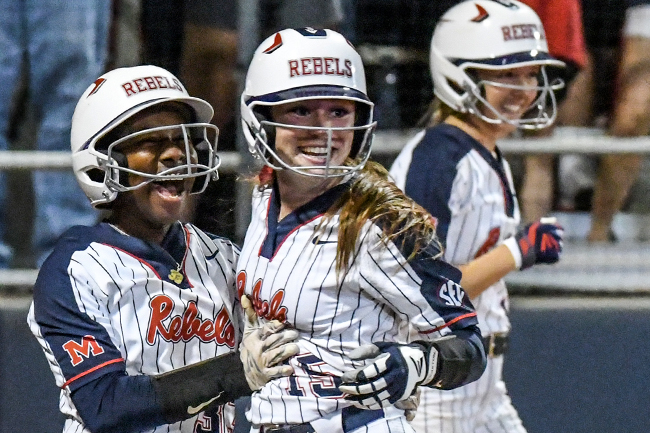 An record crowd turned out late Friday night to watch a historic game at the Ole Miss Softball Complex.

The experience was shorter than expected, but for a group of players and fans finally reveling in postseason softball in Oxford, it was just as sweet.

Kaitlin Lee put together another strong performance in the circle, Kylan Becker supplied nearly all the offense, and Ole Miss started its NCAA Tournament run with an 8-0 win over Southern Illinois in five innings in the program’s first tournament game ever played on campus.

Ole Miss (41-18), the No. 12 national seed, advanced to face Arizona State, a 9-3 winner over North Carolina in the regional opener, in the winner’s bracket Saturday at 1:30 p.m. The Rebels’ 41st win matched a single-season program record and came in front of an overflowing crowd of 1,677 — the largest in school history.

Miranda Strother’s walk-off single put the eight-run rule into effect after five innings, but it was Becker who came up with the most timely swings. The sophomore outfielder drove in five runs, hitting an inside-the-park home run to make it 7-0 earlier in the frame after plating three runs with a bases-clearing triple as part of the Rebels’ five-run second inning that brought the capacity crowd to a roar.

“I had bellybugs,” Becker said. “I was kind of like, ‘Oh my gosh, all these people are here for us.’ It was awesome. Great atmosphere.”

Ole Miss finished with eight hits against Southern Illinois’ Brianna Jones (18-13). Elantra Cox went 2-for-3 and scored two runs while Courtney Syrett and Paige McKinney each had an RBI for the Rebels, who took advantage of two walks and a pair of bunts to break open their fifth straight win.

“They’re the 12th-seeded team in the country,” Southern Illinois coach Kerri Blaylock said. “They’re so good, so fast and can create so well.”

Lee (21-10) didn’t show any ill effects after throwing every pitch for Ole Miss during its run to the Southeastern Conference Tournament championship last week. The junior right-hander went the distance again, scattering four hits while allowing the Salukis (33-23) to get a runner in scoring position just once.

Lee induced a flyout and a foulout to thwart Southern Illinois’ only real threat in the third. Ashton Lampton’s throwing error to begin the fifth was the only other baserunner the Salukis produced against Lee, who tied her own school record with her 10th consecutive complete game.

Eyrika Brandenburg, the Salukis’ leading hitter coming in, was the only Southern Illinois player with multiple hits.

“I don’t think my stuff was moving phenomenally or was my best, but I had my stuff, had what I needed to and threw some pitches in that I really don’t normally throw on a daily basis,” Lee said. “I think it just worked out well for me.”