In or out? Ole Miss believes it has ‘done enough’ for NCAA Tournament bid 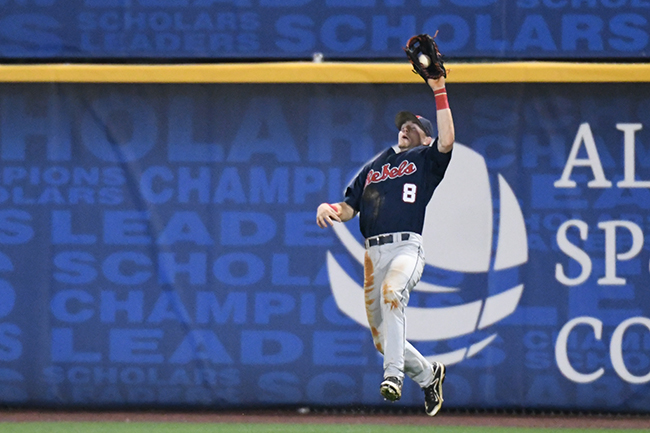 Ole Miss' Will Golsan makes a catch against Auburn in the SEC Tournament at the Hoover Met in Hoover, Ala. on Tuesday, May 23, 2017.

Brady Feigl believes Ole Miss has the pieces to make a run in a regional, adding that the Rebels can be “a scary team” when everything is clicking.

But Ole Miss’ sophomore right-hander finished his thought with an important caveat.

“We’ve just got to get there,” Feigl said.

Whether that happens is anyone’s guess.

Ole Miss’ season is coming down to the wire with the NCAA Tournament field set to be announced at 11 a.m. Monday. The Rebels (32-25) haven’t played since going one and done in the Southeastern Conference Tournament on Tuesday with a loss to Auburn — Ole Miss’ fourth loss in five games — leaving their fate in the hands of the selection committee with a bubbly postseason résumé.

Ole Miss has 13 top-50 RPI wins and is 16-21 against the RPI top 100, but the Rebels finished 14-16 in SEC play during the regular season, which could be a problem with an RPI that has dropped to 36 since Tuesday’s loss. Seven SEC teams in the last five years have made the tournament with sub-.500 league records, but all of them had RPIs in the top 28.

Ole Miss took series from Arkansas (12 RPI) on the road, Vanderbilt (26) and Texas A&M (45) during the regular season but lost four times to Mississippi State and was swept at Florida. The Rebels’ best RPI wins are LSU (6), Southern Miss twice (8) and Kentucky (9), but Ole Miss didn’t win its series against LSU or Kentucky and also lost its final series at Auburn (43) before Tuesday’s rematch.

Sub-100 RPI losses to Memphis, Arkansas State and Georgia State could give the committee another reason to keep Ole Miss out, but head coach Mike Bianco believes what his team has done against the usually stiff competition of the SEC should be enough to warrant an at-large berth.

“It certainly wasn’t the year we expected or wanted, but certainly I think it’s worthy of playing in the postseason. I think we’re one of the best teams around when you talk about the 64.”

D1Baseball.com had Ole Miss as a 3 seed in its most recent regional projections, which were released before the Rebels played Tuesday, while Baseball America pegged the Rebels as one of its last four teams in the field after Tuesday’s loss.

Bianco and his players may be confident in their body of work, but they’ll beat sweating it out until Monday.

“We’ve had quality wins,” outfielder Will Golsan said. “We’ve played hard and we’ve played well, so I feel like we’ve done enough for it.”

Iowa and Northwestern, neither of which will make the tournament without the Big 10’s automatic bid, are still alive in the Big 10 Tournament while Xavier, with an RPI of 87, has two chances to beat second-seeded St. John’s today for the Big East Tournament title.

Oklahoma State, the No. 8 seed in the Big 12 Tournament, will play Texas for the tournament title today. East Carolina, which began the week just two games over .500 overall, will also try to steal a bid today against Houston in the American Athletic Conference Tournament title game.

A 30-29 Rice team will try to snatch a bid against Southern Miss today in the Conference USA Tournament championship game. Top-seeded Missouri State needs to win twice today in the Missouri Valley Conference Tournament to keep Illinois State or Dallas Baptist from stealing a bid.