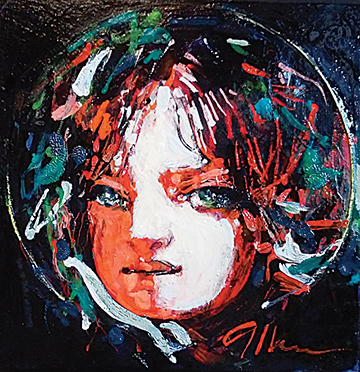 A Jere Allen painting. The Oxford artist was honored Saturday by the Mississippi Institute of Arts and Letters during a banquet at Delta State University.

The Mississippi Institute of Arts and Letters presented Allen and Jones with the Noel Polk Lifetime Achievement Award at an awards banquet Saturday at Delta State University in Cleveland. Additional winners in an array of artistic, musical and literary fields also were honored.

Mississippi proved fertile ground for Allen. An internationally known figurative artist and professor emeritus of art at the University of Mississippi, Allen came to Ole Miss in 1972 with two small kids — a stake that has grown now to four generations.

“If I had wanted to go somewhere else, I couldn’t have left because my children didn’t want to leave,” he said good-naturedly. “When I retired … I couldn’t leave, because I wanted to see everybody grow up. I’ve got grandkids and great-grandkids. So I’m not going anywhere.” 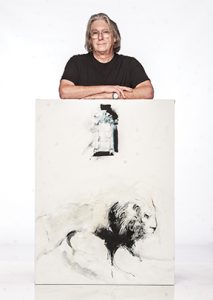 He recalled a 1974 visit to his old department chair, Buck Ewing, at the University of Tennessee, where he had earned his Master of Fine Arts.

“I was whining about the number of people in Oxford. It was such a small community and there was not much for fine artists here. … He asked me what had I always said I wanted to do, and I said, ‘Paint.’” And he said, “You’re painting. … Go back to Mississippi, stop whining and paint.’”

That echoed similar direction, “just paint,” from his wife, Joe Ann, years earlier, when he had worried how he was going to support his family.

He got to the business of painting.

Allen has been a recipient of the Mississippi Institute of Arts and Letters Visual Arts Award, a Mississippi Arts Commission fellowship and Fulbright Foundation grant. His paintings are part of many public and private collections and were included in a Meridian International Exhibition that toured Southeast Asia. His dramatic, evocative paintings often have nothing to do with Mississippi. Exceptions include a series inspired by an overnight trip on the Tchoutacabouffa River (the banks of which once served as the source of some of George Ohr’s clay, he heard), and another series that drew on his experiences at the Tougaloo Art Colony.

“I just had a feeling for the place. It’s got a spirit to it,” he said.

His wife shared a telling statement. When invited to be part of an art show described as “just for Alabama artists,” Allen replied, “Make no mistake. I’m an Alabama boy, but I’m a Mississippi artist.”

For Samuel Jones, born in his grandmother’s home in Inverness and raised in Indianola, the flat Mississippi Delta land, its sounds, aspects of life and influences of people — family, community, teachers and great Mississippi writers, particularly Eudora Welty — are part of the amalgam that nurtured his creative spirit.

“All of this kind of swirls together in this great mixture,” he said. “And then, there’s just the emotional underpinning that ties it all together.”

Both his mother and father were very musical, and teachers such as Sara Baggett in the Delta; his high school band director, Louis Pullo, at Central High in Jackson, and music professor Virginia Hoogenakker at Belhaven College (where Millsaps students then went for music study) were tremendous influences, he said, recalling the many marches he wrote in study hall and such a love for playing.

“I never had to be asked to practice,” he said.

He knew in college that music would be what he would do the rest of his life (fulfilling, he would learn years later, his mother’s prayer when he was in utero).

The land left an indelible mark, as did the Southern storytelling tradition. He recalled hours spent watching and listening to the steam locomotive that chugged past his grandmother’s house, captured in the “Locomotive” movement of his orchestral suite, Roundings. A sense of the narrative “is somehow in my bones,” he said.

“I feel a certain kinship with something that Beethoven said, that he always had in mind a picture when he was writing. … There needs to be a strong emotional reminiscence or key or template to the music. You can tell the difference — music that is just spinning notes together and music that seems to somehow grab you and say something deeper.”

Even in the birthplace of the blues, he didn’t have much contact with its practitioners growing up, though he did encounter The Red Tops dance band, which played all the Delta dances in his day. The power and emotional intensity of their playing stuck with him. So did some technical aspects of blues music, imbuing his own creations with that deeply expressive sense of yearning.

“It is the way that music does its magic. … It hits you in the soul,” he said.

Jones is a graduate of Millsaps College with a master’s and doctorate from the Eastman School of Music in Rochester, N.Y. His career as composer, conductor and educator has included past presidency of the Conductor’s Guild, the role of founding dean of the Shepherd School of Music at Rice University, a 14-year tenure as the Seattle Symphony’s composer in residence and a Grammy nomination. He has won the Mississippi Institute of Arts and Letters Music Composition (Classical) Award multiple times, as well as awards and grants from the Ford Foundation, ASCAP and NEA. His works have been performed across the United States and his music has been commissioned by the Seattle Symphony, Philadelphia Orchestra and more.

Additional Mississippi Institute of Arts and Letters special awards this year include a Citation of Merit presented to Thacker Mountain Radio, a live Oxford-based radio show that features author readings and musical performances, and a Special Achievement Award to painter and arts advocate Nan Sanders, who was instrumental in the founding and growth of the Hazel and Jimmy Sanders Sculpture Garden at Delta State University.

The nonprofit Mississippi Institute of Arts and Letters honors works first published, performed or shown in 2016. Winners are selected by out-of-state judges prominent in their respective fields, and each category winner receives $1,000. Artists are nominated by the institute membership, which is open to the public (for more information, visit ms-arts-letters.org). Winners are living and are either native Mississippians or lived in the state during a time key in their artistic progress, said JoAnne Prichard Morris, outgoing institute board president.

“MIAL is thrilled to be having this in Cleveland, and on a very auspicious day in the Delta, the third of June” she said in a nod to the 50th anniversary of Bobbie Gentry’s classic Ode to Billie Joe. In addition to the awards banquet, a Delta Meat Market food truck picnic, readings and signings and a pre-banquet reception at the Grammy Museum Mississippi will celebrate nominees and winners.