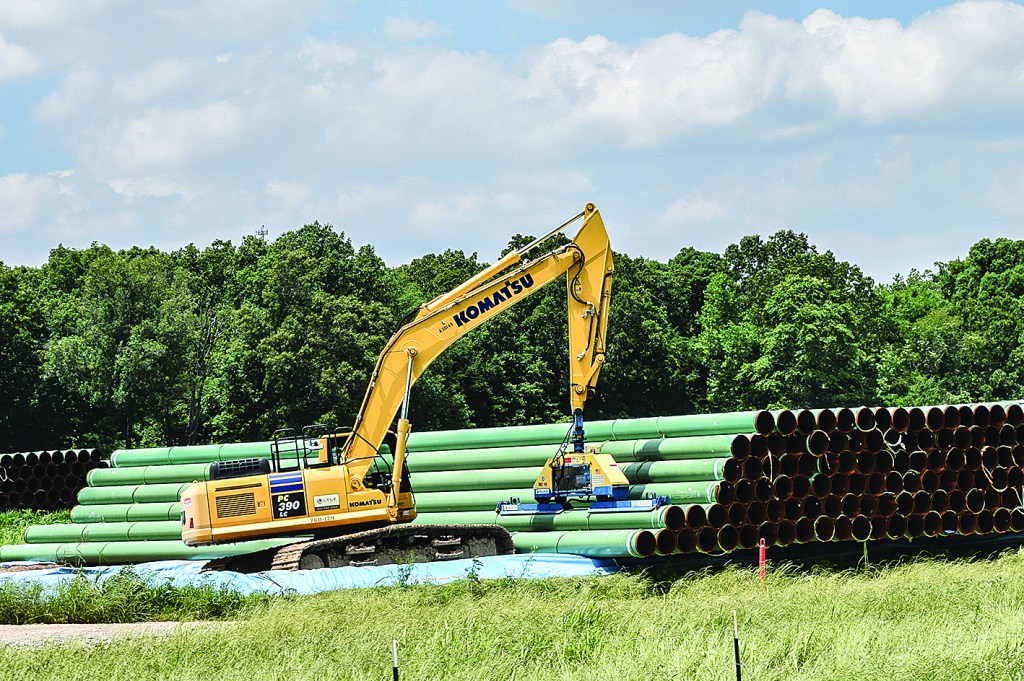 Pipe, like these in Hazen, Arkansas, are stacked up for Diamond Pipeline from Cushing, Oklahoma to Memphis.

We all know that elections have consequences, and the one we experienced last November is turning out to be devastating for Mother Nature. It won’t be Russian involvement, secrets, or collusion that bring us down, but storms, drought, floods, the devastation of bee colonies, and food shortages.

All these things are the result of our dependence on fossil fuels. Fossil fuels are warming the Earth, and leaking from pipelines everywhere. While all this emotion builds up about who is right or who is wrong holds our attention, we are ignoring the real life and death concerns which will affect us long after this season of discontent is over.

A few short months ago, the Standing Rock Sioux were removed from their own sacred land where they braved freezing temperatures over a long winter trying to protect the Missouri River, their primary source of drinking water. Many of them were arrested.  They were called protesters, yet I think of them as protectors.

Today, the Dakota Area Pipeline is almost complete. (New York Times) Pictures from the area are ugly. Where there were once green fields, there is now a dark brown swath of scored land and a landscape inhabited by large machinery. The news coverage has stopped, but what exactly happened? Donald Trump was elected; that’s what happened. The DAPL is owned by Energy Transfer Partners (whose CEO donated money to the Trump Campaign) and Phillips 66. Until November 2016, President Trump was a stockholder in both companies. (AP and nydailynews.com) Now with anti-environment proclamations coming out of the Oval Office like Frisbees being thrown randomly at unsuspecting targets, what are we to do?

We need clean rivers. “The Missouri provides drinking water for over 18 million people. In addition to other health concerns, crude oil in drinking water can expose people to neurotoxins known to cause birth defects and other irreversible damage.” (Mekasi Horinek, nativetimes.com)  Oil spills have destroyed entire ecosystems in the past, and this pipeline is scheduled “to cross both the Missouri and the Mississippi Rivers and up to 200 other waterways in its current path.” (nativetimes.com)

It’s tragic that we elected a president that has seemingly no intention to cut carbon emissions or promote clean energy and conservation. In an interview in September of last year with radio host Hugh Hewitt, Donald Trump verified that he has no plan to address Climate Change and erratic weather patterns:

HH: Do you believe that the temperature of the Earth is increasing? And what would you do if you do believe that, concerning global climate change?

My husband tells me to be more positive with my articles. He says, “Tell people about all the jobs being created in the wind power industry, about all those schools “Out West” teaching maintenance and repair of wind turbines. Tell them they can make good money.” OK. All of that is true. There are good careers being started in wind power. Yet, it is hard to be positive without good leadership and policies dedicated to sustainability and conservation.

I am not exaggerating when I say that what matters now is that we stop the madness that will destroy our economy and collapse our civilization. Our rivers, streams, marshlands, lakes, and oceans and all the wildlife within are threatened every day by waste from industry, fracking, plastic and garbage — not to mention all the oil spills which never make national news.

Do you remember that in the U.S. last year there were 28 pipeline breaks, ruptures, and explosions, resulting in millions of gallons of crude oil spilled, people sent to the hospital, and at least three (human) deaths? (Wikipedia)  If you don’t remember, it is probably because these tragedies don’t often make national news.

Our moment of destiny has come. We did not elect a president that puts the Environment or a healthy planet first. From Election Day forward, we were left hoping our senators and representatives, and all states could work together to make the switch to clean energy.

The Keystone XL Pipeline, like the DAPL, was halted by President Obama, but is now back on the table. Nebraska farmers and landowners who had relaxed for a few months are planning on speaking their minds against the project at a hearing on Environmental Impact set up for August. Those words “Environmental Impact” are vital in every decision we make — or should be.

Many pipeline projects are going on across the country, and with these projects, come accidents. Just a few months ago, fires were burning from a pipeline explosion in Shelby County, Alabama, where one person died and seven others were injured. (AP) In Little Rock, a gas pipeline is scheduled to cross the Arkansas River replacing one, which exploded and polluted the river in 2015.

One of eight new pipeline projects is very close to home and could have grave consequences for our friends in Memphis as well many towns in Arkansas. The Diamond Pipeline is scheduled to transport “sweet crude” from Cushing, Oklahoma, to Memphis’ Valero refinery, crossing under every river and over 400 other waterways in Arkansas, carrying crude oil under the Mississippi River to President’s Island.

The Commercial Appeal reported in January that 12 environmentalists from Oklahoma and Arkansas were arrested in front of the Valero plant and had earlier reported that the route on Presidents Island appears to be without a layer of clay protecting the massive aquifer that the city relies on for drinking water. On their webpage, Diamond Pipeline, LLC estimates there will be (only) 15 full-time permanent jobs created.

I would like to see us embrace a common conviction that if we work together we can save our planet, our country, and the future for our children. There is a better, cleaner, safer way of harvesting power while creating many new jobs.

No matter your party, religion, education, or social standing, the science doesn’t lie, and the harsh effects of Climate Change are already destroying communities across the nation with erratic weather patterns. One simple thing we can do is vote and elect representatives, senators, a president, and local leaders who won’t ignore science and Mother Nature’s cry for help. What will the legacy of our generation be?

Let’s honor the sacrifice so many are making on our behalf. The Sioux and other Native American nations, Veterans, college students, and many other American citizens stood with Standing Rock to protect not only sacred lands but the life water brings as it flows through the Missouri, the Mississippi, and all waterways connected to those rivers.

The protectors are still fighting, and at the very least we owe them our thanks and respect, and we owe our grandchildren a future free of polluted lakes, rivers, and oceans. Speak up, talk with friends about what we can do right now. Consider a donation to the Sierra Club, the Gulf Restoration Network, or the Environmental Defense Fund, and next election, let’s exercise our right to vote for candidates who will protect our natural world.

Milly West is an Oxford resident and can be reached at millymwest@gmail.com.