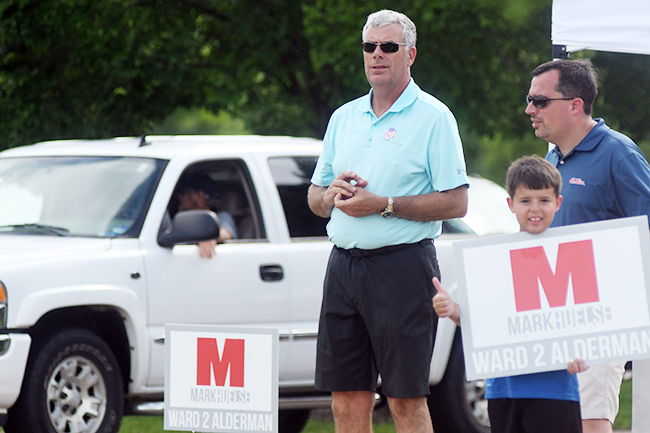 Two Republican candidates won seats on the Oxford Board of Aldermen Tuesday night as a new Democratic mayor was officially elected.

In Ward 6, Incumbent Jason Bailey, who has served on the board for five years, earned 299 votes, while his Democratic opponent, Wayne Andrews garnered 183.

In Ward 2, Mark Huelse beat his opponent Paula Shanks by earning 249 votes against her 103.

With no opponent, mayoral candidate Robyn Tannehill was elected as the new mayor of Oxford.

There were still 130 absentee votes and 15 affidavits to count Tuesday night after polls closed at 7 p.m.; however, the addition of those votes are not expected to change the outcome of the election.

About 980, or 10 percent, of the registered voters in wards 2 and 6 cast ballots in Tuesday’s election.

Bailey said he is looking forward to serving the city of Oxford and Ward 6 for another four years. Bailey was first elected as alderman during a special election in 2012 after then-alderman Brad Mayo was elected to represent Oxford in the House of Representatives.

“I’d like to thank everyone who supported me, but especially my wife and children,” he said. “I thank Wayne (Andrews) and his wife Margaret, for their willingness to serve and a hard-fought campaign. I feel very overwhelmed by everyone’s support.”

Andrews, executive director of the Yoknapatawpha Arts Council said he enjoyed campaigning and knowing on his fellow Ward 6 residents’ doors and getting to meet everyone.

“One of the best parts is that we really got to talk about issues and people became involved in their community,” Andrews said. “One of the things that motivated me to run to was to inspire people to take an active part in our community. It was a fun campaign and I think we both worked hard. And I know I’ll be better at what I do for a living after getting out and meeting everyone, so I think there’s a benefit to all of this we didn’t see coming.”

First-time candidate Huelse said he’s looking forward to making the transition from being on the Oxford Planning Commission to the Ward 2 alderman.

“I’m thankful to all my voters who supported me throughout my campaign,” he said. “The outpouring of support was amazing. I’m looking forward to helping shape the city we all love and that is what this election was all about. I’m proud and humble to be able to serve.”

“I extend my congratulations to Mark (Huelse) and thank him for a well-run race,” she said. “And I thank all the people who voted for me and I had a lot of wonderful volunteers who helped me throughout my campaign.”

Although Tannehill had no one register to run against her in the mayoral race, she admitted she couldn’t really let herself accept she was going to be mayor until after Tuesday’s election.

“I’ve been lucky to be able to begin the transition a few months ago so I’m ready to hit the ground running,” she said. “I’m very excited.”

In May, Ward 1 Aldermen Rick Addy retained his seat on the board during the Democratic primary when he won against Patrick Herbert. Ward 5 Alderman Preston Taylor also retained his seat, beating out Theressa “Terry” Hilliard in the primary.

Aldermen from Wards 3, 4 and At-Large had no opposing candidates qualify against them.

The new mayor and aldermen will take office officially on June 29 when they are sworn in at City Hall.