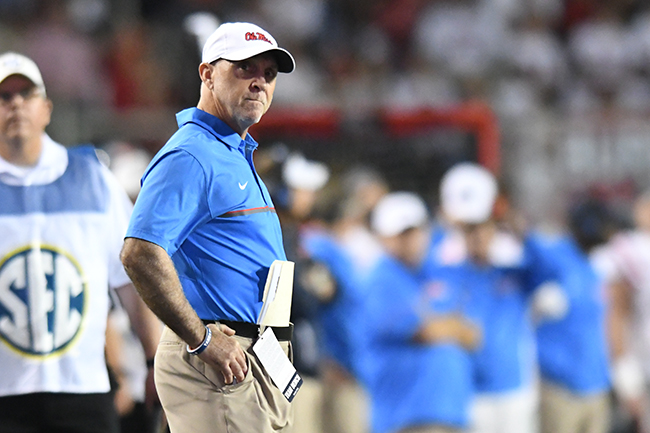 Barney Farrar and his legal team are fighting back against the stance Ole Miss has taken on the former staffer’s role in the NCAA’s investigation into the football program.

In a statement issued Wednesday, Houston-based attorney Bruse Loyd said his client wants it to be known that he didn’t purposefully circumvent the university or defy Ole Miss coach Hugh Freeze’s orders and that Farrar’s response to the NCAA’s amended Notice of Allegations will show that a majority of the allegations against the Rebels’ former off-field staff member “are without merit.”

Ole Miss on Tuesday released its response to the amended Notice of Allegations (NOA) it received from the NCAA in February, portraying Farrar as a rogue assistant who ignored compliance and lied about his involvement in recruiting violations.

Loyd has filed a response on Farrar’s behalf but said he can’t release it because of a confidentiality agreement with the NCAA.

Farrar, who was fired in December after five seasons as the Rebels’ athletic assistant director for high school and junior college relations, is named in four Level-I charges that involve Ole Miss’ recruitment of linebacker Leo Lewis, who signed with Mississippi State in 2015. Farrar is accused of arranging for Lewis and other recruits to receive impermissible benefits, including free transportation, lodging and merchandise from a booster’s store, as well as cash payments from two boosters to Lewis ranging from $13,000 to $15,600.

Ole Miss denies that payments were made but said it was “troubled” to find that Farrar was facilitating contact between boosters and recruits and that Farrar purposefully circumvented the school’s monitoring systems to break rules. In one instance, Ole Miss claims Farrar lied to Freeze about an unauthorized phone he was using to call recruits when confronted about it.

“Farrar is an outlier at the university and does not represent the culture of ‘doing things the right way’ that has been curated by the unversity’s administrative and academics leadership as well as its football head coach,” Ole Miss said in its response.

Farrar doesn’t feel that was always the case.

Loyd said Farrar believes the school was first made aware of “factual allegations” made against him in August 2016 and that evidence exists another law firm worked with the school’s representation over the next several months to begin preparing a defense. This led Farrar to believe all parties were working together to fight the allegations against him, something the school’s response showed wasn’t the case.

Even after Farrar was let go, Ole Miss continued to pay his legal fees through the end of his contract in March. Loyd said his client was never made aware of the new position taken by Freeze and the university and didn’t know about it until the school announced it had received an amended NOA in a YouTube video on Feb. 22.

“I suspect it was at some point during this time that the university decision makers decided to lay blame on Coach Farrar in an attempt to deflect the NCAA’s probe from them and offer up Coach Farrar as a sacrifice to curry favor with the NCAA,” said Loyd, who also contested that Ole Miss decision makers tried to make Farrar admit to things he didn’t do.

Loyd said he began representing Farrar in late March after learning that the unnamed law firm was representing Farrar and Freeze, which Loyd feared would create a conflict of interest. He said he sent the law firm notice that he was taking over Farrar’s representation and asked the university to continue paying Farrar’s legal fees and salary “so that he could continue to live in Oxford and actively assist the university and its counsel in the preparation of everyone’s defense,” but those requests were denied twice.

“At that point, it became very clear to me that something was not right,” Loyd said.

Yet Loyd said his client doesn’t want to point fingers, adding that Farrar “tipped his hat to Ole Miss and Coach Freeze” at the end of his response brief. The point of contention, Loyd said, is with evidence that he doesn’t believe is strong enough to warrant Farrar shouldering this much of the blame.

“Instead of standing together as one to face and fight the allegations, the decision was made to abandon and isolate one of Ole Miss’ own,” Loyd said.