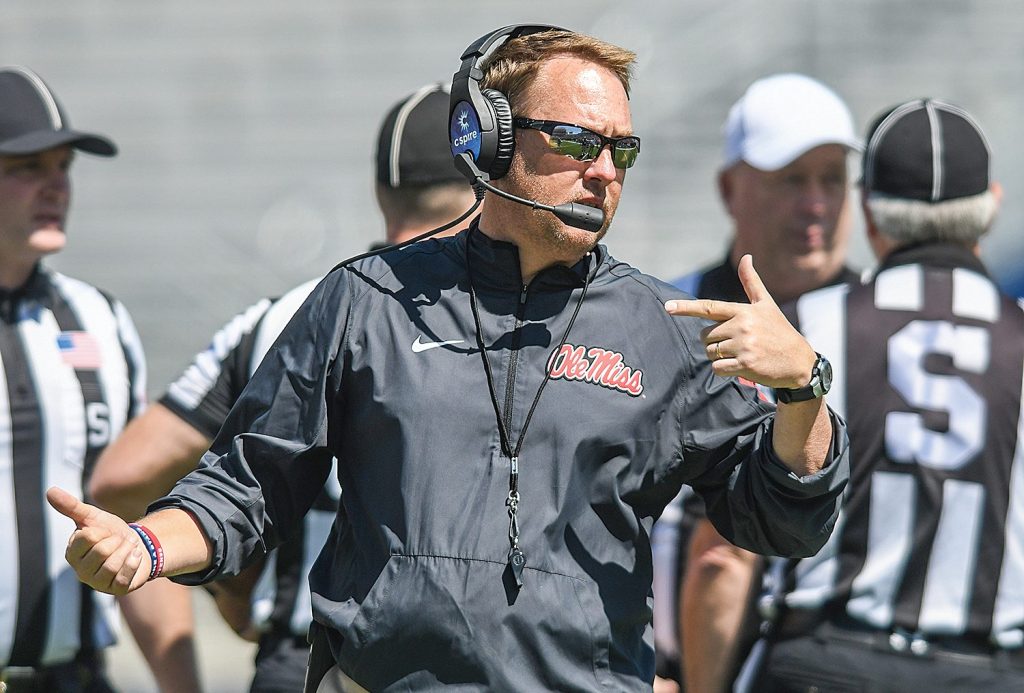 Before you even get to the actual allegations and Ole Miss’ responses to each one in the 124-page response to the NCAA’s latest Notice of Allegations the school made public Tuesday, there’s the school’s rebuttal to the failure-to-monitor charge against head coach Hugh Freeze that goes like this:

This case does not involve a head coach who facilitated or participated in violations or otherwise ignored red flags associated with them.

Freeze developed and implemented a broad, staff-wide compliance program dedicated to satisfying the NCAA’s amended head coach responsibility legislation in early 2013, and he has continuously worked to expand and improve upon that program ever since. Those who have worked under Freeze consistently report his emphasis on compliance, including his direction to promptly involve the university’s compliance staff in their recruiting choices. These reports are corroborated by the available objective evidence, including phone and text records reflecting regular communications with compliance throughout Freeze’s tenure, Freeze’s inclusion of compliance issues and compliance staff members in football staff meetings, and multiple instances of self-reports of his staff’s violations

If a head coach control charge premised on presumed responsibility can be rebutted under the amended legislation — that is, if the rule is going to be something more than a vehicle to hold head coaches strictly liable for what happens under their watch — Freeze has done so.

It’s just the beginning of a response that reads more like an ode to Freeze, who can apparently do no wrong.

Not only did Ole Miss entirely dispute the failure-to-monitor charge and the lack of institutional control, the school shot down any notion of guilt on Freeze’s part. The response painted a picture of a coach who did everything he could to educate his coaching staff on compliance before some of them acted on their own accord. Current and former assistants lauded Freeze as a stickler for the rules at one point during the response while Ole Miss even got administrators from some of Freeze’s previous stops to vouch for him with some of them saying they’d hire him again right now.

So yeah, Ole Miss is all in on Freeze, who has built up an extraordinary amount of equity in his job. It’s understandable. To a point.

The hometown guy from just half an hour down the road in Independence, Freeze has given the Rebels some of their best seasons and biggest wins of late. He’s beaten Alabama twice and led Ole Miss to back-to-back New Year’s Six bowl games, the kind of success that’s undoubtedly helped bring in more money with the university’s athletic budget being the largest it’s been since Ross Bjork took over as athletic director five years ago.

Yet Freeze, whose base salary of $4.7 million ranks ninth nationally, is 19-21 in SEC games, a mark that hardly seems irreplaceable should the end result of all this leave the Rebels looking for a new coach. Ole Miss’ 2-6 showing in the league last season was its worst under Freeze, something the Rebels will have to try to recover from with a suspect defense, scholarship restrictions and a bowl ban hanging over their collective head.

Is Freeze really the coach you want your program taking the fall for if the worst-case scenario plays out?

It’s risky seeing how the NCAA feels the exact opposite about Ole Miss’ coach. The Rebels are staring at 21 charges with 15 of them being Level-I allegations, the most serious. The NCAA didn’t investigate the program for nearly five years to throw out a bunch of charges it doesn’t think will stick.

And while the burden of proof is on the NCAA, claiming ignorance when most of the alleged violations happened during Freeze’s tenure is bold. Head coaches can get suspended for sins committed by their assistants, and consistently playing the I-didn’t-know card could be seen as a brash, irresponsible defense that escalates things with a governing body that wants to send a message with everyone watching.

The school is trying to strengthen its case by making former off-field staffer Barney Farrar the fall man and discrediting the NCAA’s primary witness, Mississippi State linebacker Leo Lewis. Ole Miss referred to Farrar in its response as “an outlier,” portraying him as a rogue assistant who even used a separate cell phone to contact recruits that Freeze nor any other staff members knew about.

Farrar is named in four Level-I allegations, but was he really acting alone in his transgressions or was he taking orders from someone? He can’t be happy about being singled out. It would be interesting to hear his side of things.

But regardless of what else may come out between now and the day Ole Miss has its hearing with the Committee on Infractions, both sides have made it clear they’re not budging. Ole Miss’ support of Freeze is full speed ahead, and the NCAA isn’t slowing down in its chase for blood.

A crash is inevitable. The only question is who walks away from it.