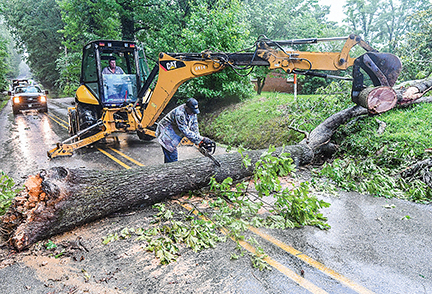 County workers remove a tree from Old Taylor Road after it fell during a storm near Taylor, Miss. on Friday. The tree took out electric lines when it fell.

Two of the trees fell in Taylor.

“One of them fell on some power lines and caused some outages,” said Lafayette County Emergency Management Coordinator Steve Quarles.

The trees fell across the roads, but didn’t do any damage to homes, Quarles said.

High winds caused the power to go out for about 300 people in the southern part of the county on Friday morning.

The worst of the storms were over by Friday evening.

Cindy on the move

Early Thursday afternoon, a tornado was observed west of Birmingham, Alabama, with damage in Fairfield consistent with an EF2 tornado with 120 mph winds.

The tropical storm strengthened and expanded as it moved northward. On June 21, winds increased to 60 mph and tropical-storm-force winds expanded to more than 250 miles from the storm’s center.

Cindy made landfall as a tropical storm on the northern Gulf Coast between Cameron, Louisiana, and Port Arthur, Texas, early Thursday, June 22 with maximum sustained winds of 40 mph.

In Alabama, Cindy was blamed for the death of a 10-year-old boy, who was killed by debris June 21 in Fort Morgan.

Damage from an EF0 tornado occurred in the morning in Fort Walton Beach, Florida. Two additional tornadoes were reported near Biloxi, where there was damage to trees, power lines and fences. Storm spotters reported a tornado just north of Onycha, Alabama, in the evening, but no damage or injuries were reported.