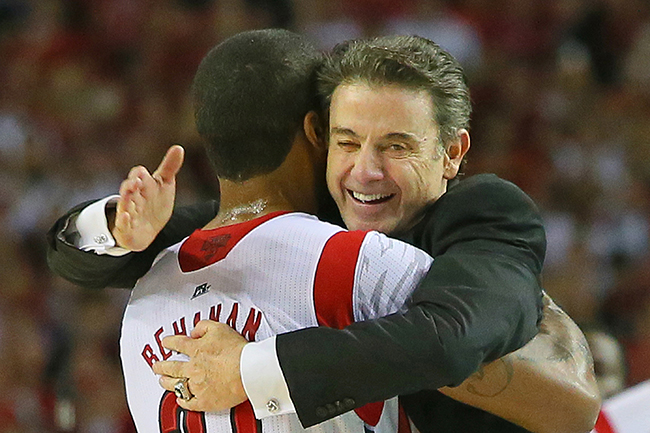 I was starting a week of vacation when the sanctions came down in the Louisville men’s basketball’s infractions case two Thursdays ago, so I didn’t immediately react to the ruling. So here it goes.

In case you missed it, Louisville coach Rick Pitino was suspended for five Atlantic Coast Conference games next season while the program will have to vacate any wins in which ineligible players competed from December 2010 to July 2014 after an investigation found that former staffer Andre McGee arranged for players and recruits to have sex with prostitutes on campus. The school is appealing the ruling because, well, it doesn’t want to vacate its 2013 national championship (good luck with that, Louisville).

First of all, Pitino’s punishment — if you want to call it that — is a joke.

Of course Pitino denied knowing anything about what his former staffer was doing, but whether you believe that or not, the NCAA introduced the head coach responsibility rule a handful of years ago that makes what a head coach claims irrelevant. Bylaw 11.1.1.1 in the NCAA rules manual states the head coach is “presumed to be responsible for the actions of all institutional staff members who report, directly or indirectly, to the head coach” and adds that the coach has to promote an atmosphere of compliance and monitor all staff members.

So an assistant who worked directly under Pitino paid hookers to have sex with players (some of whom were underage) in a building on campus over a four-year period. It’s a fireable offense. Unless you’re Rick Pitino. Then you just have to watch five games from the comfort of your million-dollar home.

Dude should be writing thank-you notes to every member of the NCAA’s Committee on Infractions. Amazing.

Secondly, Pitino’s ignorance, silence, willingness to look the other way, whatever you want to call it, got him hit with a failure-to-monitor charge, the same Level-I allegation Ole Miss football coach Hugh Freeze is trying to fight. So the pressing question is does the Louisville verdict serve as precedent for what may be coming for Ole Miss when its case reaches its resolution this fall?

I have no clue, and anybody that tells you they’ve got one is lying.

Ole Miss is facing 15 Level-I charges and has admitted to some of the violations that have resulted in the school punishing itself with scholarship reductions and a one-year postseason ban like Louisville did last season, but that’s where the oranges stop being compared to oranges in these cases.

The NCAA wants to add to Ole Miss’ penalties based largely on the immunity testimony of rival players Leo Lewis and Kobe Jones, whose pay-for-play allegations and claims of other impermissible benefits were dissected and completely refuted throughout Ole Miss’ response to the amended Notice of Allegations. Rebel Rags, which has been accused by Lewis, Jones and Lindsey Miller, Laremy Tunsil’s stepfather, of doling out thousands of dollars in free merchandise, believes the claims are so hollow that the apparel store is suing for defamation and wants the entire allegation thrown out.

Lewis and Jones will be deposed at some point (it’s scheduled for July 19, but the legal process will likely push that date back), which will throw their immunity out the window and air out the dirty laundry of every school that recruited them. More lawsuits, which is a possibility with 15 John Does among the defendants in the Rebel Rags suit, could muddy things up even further and force the NCAA to decide if its star witnesses are credible enough to push forward with some of the charges (the NCAA will respond to Ole Miss’ response late next month).

But for the sake of this column, let’s assume everything sticks. Does Ole Miss get hit with a multi-year bowl ban it’s desperately trying to avoid? If so, the NCAA would be saying that players getting money and other impermissible benefits is worse than providing sex on campus since Louisville somehow wasn’t also hit with a lack of institutional control.

And what about Hugh Freeze’s punishment? A suspension is likely, but for how long?

Again, Pitino got five games for what was essentially a brothel being operated in his program. Louisville played 31 regular-season games last season and will play close to the same number this coming season, which means Pitino will only miss roughly 16 percent of the season.

A two-game suspension for Freeze would be pushing 17 percent of the Rebels’ 2017 season with no possibility of a bowl game. No way Freeze’s personal punishment can be more severe than Pitino’s, right?

But we’re talking about a governing body that gave Auburn basketball coach Bruce a three-year show-cause penalty for lying about a barbecue with recruits when he was at Tennessee and hit Southern Cal with some of the harshest penalties its doled out because former Heisman Trophy winner Reggie Bush and hoops standout O.J. Mayo took money from agents yet slapped Pitino on the wrist despite his staffer using sexual favors as an appalling recruiting tool.

Punishment is a given for schools that get caught breaking the rules that they’ve agreed to as volunteer members of the NCAA, but it should fit the crime. The NCAA struggles with that concept for some reason, making it anybody’s guess as to what the final verdict for Freeze and his program will be.