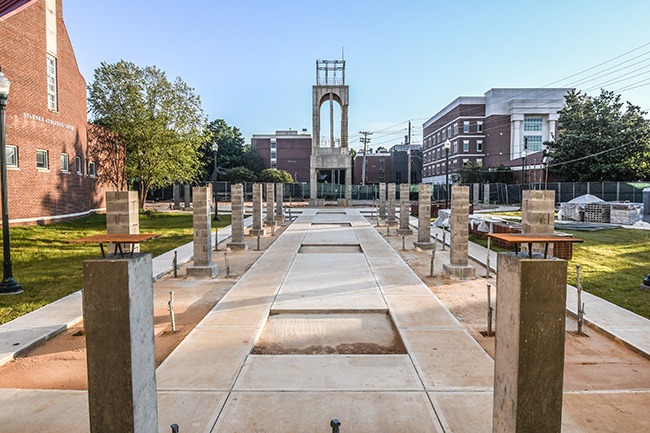 Completion of construction of the Bell Tower outside Vaught-Hemingway Stadium, in Oxford, Miss. on Wednesday, June 28, 2017, has been delayed until spring 2018.

Ole Miss’ vision of a new bell tower being a focal point on campus will have to wait a little longer.

Construction of the bell tower, part of the new North end zone plaza at Vaught-Hemingway Stadium, has been halted after school officials recently discovered the structure wasn’t being built according to architectural designs. Nearly 50 feet of a tower that will be just more than 60 feet tall once completed had been constructed.

The Jake Gibbs Letterwinner Walk is still on track to be completed in time for Ole Miss’ season opener against South Alabama on Sept. 2, athletic director Ross Bjork said, but a target date for the bell tower to be completed has been pushed back to the spring.

“In our world, we live in a very aggressive, fast-paced environment in athletics, so anytime something doesn’t meet your standards or timeline, it is frustrating,” Bjork said.

Ole Miss and the original contractor mutually agreed to part ways with Innovative Construction Management taking over as the general contractor. What has already been built is crooked and will be demolished in the coming weeks.

“There are specs and there are standards that you have to meet per the building codes, building requirements, architectural drawings, and you want it to be perfect,” Bjork said. “We were having some challenges executing that.

“Basically we’ll have to start over pretty much at the base of the foundation and build it the right way.”

Bjork said the school is still working to figure out how much the tower’s reconstruction is going to cost. The budget for the entire plaza, which includes letter-winner plaques that will be mounted on brick columns extending from the Walk of Champions on All-American Drive to the north end zone entrance, is approximately $2 million.

Construction on the bell tower is expected to start again in the fall.

“Really the focus will be let’s get the plaza done and let’s get the letter-winner walk done,” Bjork said. “That’s the immediate need so we can make sure we have the right traffic flow and pedestrian flow on gameday and focus on the bell tower kind of in a second step.”

Bjork said the idea is for the tower to be a long-lasting “destination point” that could also introduce new traditions such as ringing the bell for signature wins or historical events on campus. Getting it right is the top priority.

“This bell tower will last forever,” Bjork said. “That’s the plan is that this bell tower is up there for several, several centuries and that it’s an icon on campus. The location is perfect as it ties into the Grove, so getting it right is more important than speed.”