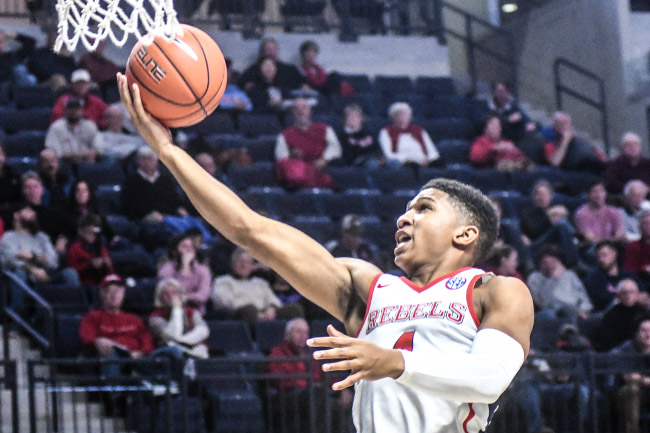 Ole Miss Breein Tyree shoots against Murray State at The Pavilion at Ole Miss, in Oxford, Miss. on Thursday, December 15, 2016.

All things considered, Breein Tyree had a solid freshman season.

If this summer is any indication, Ole Miss’ young point guard is primed to take his game to another level.

Tyree has caught the eye of Ole Miss coach Andy Kennedy during workouts with improvement that goes beyond his skill set. Tyree was less than full strength all of last season after suffering a torn ACL during his senior year at St. Joseph (New Jersey) High that limited the explosiveness Kennedy grew accustomed to seeing from Tyree during the recruiting process.

Tyree was still rehabbing after surgery this time a year ago. He wasn’t cleared to return to full basketball activities until weeks before the season, but the 6-foot-2, 192-pounder worked himself back into shape to play in 34 games while gradually increasing his minutes to where he averaged nearly 20 per game.

More than a year removed from the injury, Tyree’s athleticism is starting to become more recognizable to his coach.

“The biggest improvement I’ve seen just because he wasn’t fully healthy and he didn’t have this summer last year based on the injury coming out of high school is Breein Tyree,” Kennedy said. “To see him back healthy, whole and regaining the bounce and the confidence that we recruited him with has been very pleasing.”

Even with a knee that wasn’t 100 percent, Tyree flashed his potential during his first season in the Southeastern Conference. He averaged 7.3 points and 1.9 assists while permanently moving into the starting lineup five games into the SEC schedule.

He shot just 31 percent from 3-point range, but his strengths reverted back to his quickness and burst as the season wore on. He scored 15 points against Tennessee in his second SEC start, 20 against then-No. 1 Baylor and went on to score in double figures in seven of Ole Miss’ last nine games, including a career-high 24 at Mississippi State in February.

The peak of Tyree’s progress was on display against the Bulldogs when he drove past two defenders and elevated over Aric Holman to throw down a baseline dunk that made SportsCenter’s top 10 plays.

“We’re in to games, and it was a process for him physically,” Kennedy said.

A fully healthy Tyree should further bolster a backcourt that also has the Rebels’ top two scorers back from last year in Deandre Burnett and Terence Davis. The Rebels are adding Memphis transfer Markel Crawford, top-100 national recruit Devontae Shuler and Ukrainian guard Illya Tyrtyshnik to the mix while Drake transfer Dominik Olejniczak and junior college All-American Bruce Stevens are new additions to the frontcourt.

Kennedy said he likes what he’s seen from the mixture so far with the veteran players leading the way.

“Guys are working hard. We’re introducing some new guys into the program, so it’s been good to have a limited opportunity to work with them,” Kennedy said. “Really been pleased with the upperclassmen who are returning and the way they’ve approached the offseason.”