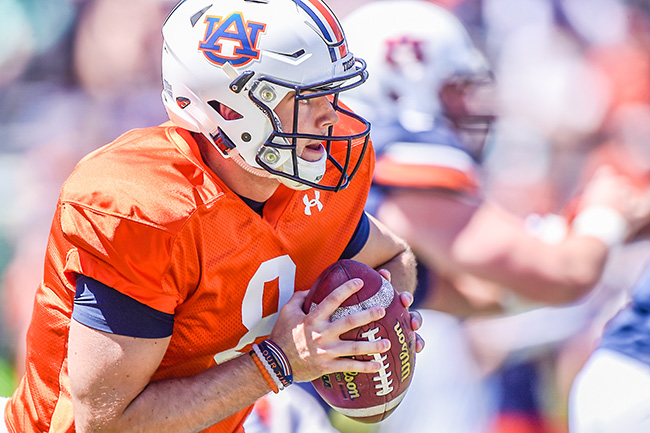 WRITER’S NOTE: This is the fifth of a 12-part series breaking down each of Ole Miss’ opponents for the 2017 season.

Auburn’s offense under Gus Malzahn put up some of its usual numbers last season, but the Tigers lost their balance.

They’ve made some moves they hope will help them get it back this season.

Auburn will have a new offensive coordinator and a new quarterback, and Ole Miss will get its look at the Tigers’ retooled offense Oct. 7 when the Rebels end their month-long road trip at Jordan-Hare Stadium. Auburn has won three of the last four meetings in the series, including a 40-29 win in Oxford a season ago.

Auburn rolled up 307 rushing yards against the Rebels’ porous run defense a season ago, but the Tigers did that to nearly everybody. Auburn finished sixth nationally in rushing offense behind 240-pound bruiser Kamryn Pettway, who will again be the Tigers’ featured back after rushing for 1,224 yards and seven scores as a sophomore last season, and the more elusive Kerryon Johson, who added 895 yards and a team-best 11 rushing touchdowns.

Churning out yards on the ground is what Malzahn’s spread offense does — he’s produced 14 1,000-yard rushers in 11 seasons as a head coach or coordinator at the collegiate level — but Auburn lost five games despite also having a top-30 defense because of a passing game that fizzled out.

Auburn’s 169.6 passing yards per game were last in the SEC as injuries to quarterback Sean White prevented the Tigers from stretching defenses with a vertical passing game. In an attempt to solve its quarterback issues — White, a rising junior, has yet to get through a season healthy while backup John Franklin III has moved to receiver — Auburn signed former Baylor quarterback Jarrett Stidham, a former five-star recruit who left the Bears’ program after throwing for 1,265 yards, 12 touchdowns and two interceptions in just three starts as a true freshman in 2015.

Stidham and White are still technically competing to be the starter, but it would be an upset if Stidham, who completed 16 of 20 passes for 267 yards in the Tigers’ spring game, doesn’t end up getting the nod. Whoever wins the job will still be adjusting to a new offense under first-year coordinator Chip Lindsey, a former offensive analyst at Auburn under Malzahn who spent the last three seasons leading offenses at Southern Miss (2014-15) and Arizona State (2016), while trying to find reliable receivers with none of the Tigers’ returning pass-catchers having caught more than 25 passes last season.

Auburn’s defense also has some holes to fill, though the cupboard is far from bare.

The Tigers were a stingy group last season, finishing in the top 50 in total defense and run defense while their 17.1 points allowed per game was good enough for seventh nationally. All-SEC defensive linemen Montravius Adams and Carl Lawson are off to the NFL, but former top recruits Dontavius Russell, Marlon Davidson, Jeffrey Holland and Derrick Brown are expected to help replace that production up front.

Auburn returns its top three tacklers from a season ago in senior safety Tray Matthews, senior linebacker Tre Williams and junior linebacker Deshaun Davis. The Tigers also have a special-teams weapon in kicker Daniel Carlson, a Lou Groza Award finalist last season after going 28 of 32 on field goals with three of those misses coming from outside 50 yards.