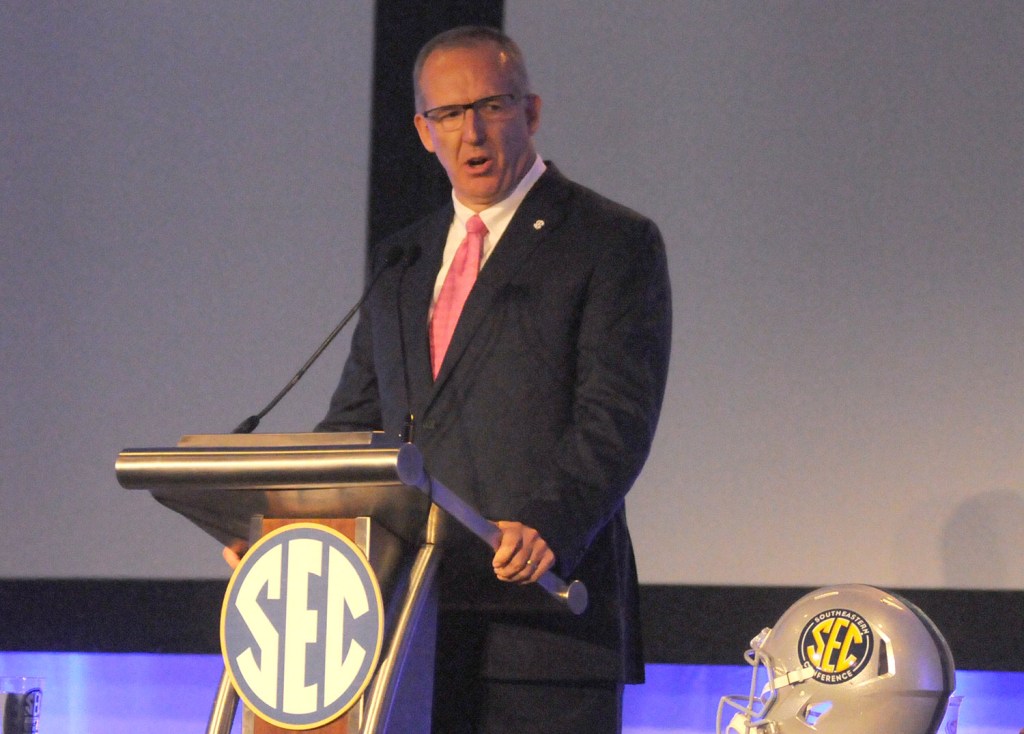 SEC Commissioner Greg Sankey speaks at SEC Media Days on Monday at the Wynfrey Hotel in Hoover, Ala. (Davis Potter)

HOOVER, Ala. — Southeastern Conference Commissioner Greg Sankey didn’t have much to offer on a question he fielded about conference realignment Monday during SEC Media Days.

That’s because, Sankey said, it’s not being seriously entertained.

Realignment has been a hot topic of conversation during the offseason, but Sankey said it hasn’t been an agenda item in any meetings and hasn’t been discussed with the league’s 14 members. The SEC’s Eastern and Western Division each have seven teams after Texas A&M was added to the West and Missouri joined the East as part of the conference’s expansion in 2012.

“It is a conversation in most press conferences in which I appear, and that’s the extent of the conversation,” Sankey said.

The topic came back into focus earlier this year when former Auburn coach Pat Dye was vocal in interviews about his belief that Auburn and Missouri should switch divisions to make more geographical sense. Hypothetically, that would move Auburn to the East and put Missouri in the West.

“Just think about the inconvenience of the Missouri fans having to travel to the East to watch games on the road and of the families that want to go watch their children play,” Dye said during an appearance on The Paul Finebaum Show in May. “It just makes no sense for Missouri to be in the East.

“(Auburn) is on the Eastern part of Alabama. We’re 30 miles from Georgia. We touch Florida and Tennessee, and we need to be in the East. And Missouri needs to be in the West.”

Part of the reason for the current set-up is to keep inter-conference rivalries intact. With each team only playing one permanent cross-division opponent each season, a potential move to the East for Auburn would mean Alabama couldn’t play both Tennessee and its in-state rival every year.