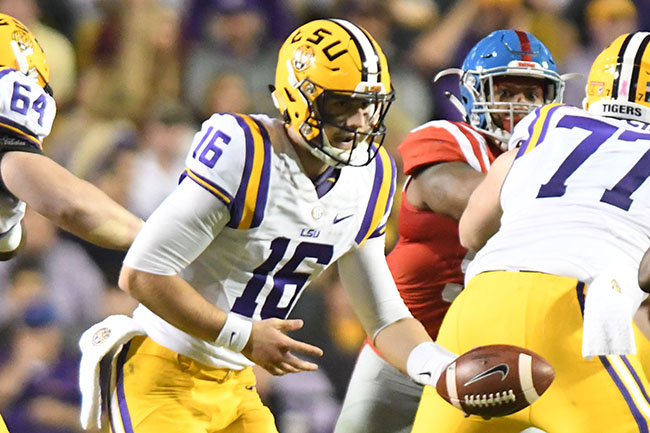 WRITER’S NOTE: This is the seventh in a 12-part series breaking down each of Ole Miss’ opponents in 2017.

Ed Orgeron will be a head coach in Vaught-Hemingway Stadium again this season.

Orgeron, getting his second chance at a permanent gig at the Football Bowl Subdivision level, will lead LSU into the place he called home for three tumultuous seasons when Ole Miss hosts the Tigers on Oct. 21 for the middle game of a three-game homestand. Orgeron served as the Tigers’ interim coach a month into last season after Les Miles was fired and was promoted to the permanent title after leading LSU to a 6-2 record the rest of the way.

Orgeron is 12-4 in his last 16 games as a head coach — his first interim post came at Southern Cal in 2013 — but his struggles at Ole Miss a decade ago have been well-documented. The wins were few and far between for Oregon in Oxford from 2005-07 as the Rebels went 10-25 with just three Southeastern Conference wins during that span.

Orgeron will be going for his first win at Vaught-Hemingway Stadium as a head coach since Nov. 3, 2007 while Ole Miss will be looking to avenge a loss to its former coach last season. Behind Leonard Fournette’s school-record 284 rushing yards, LSU handled Ole Miss 38-21 a season ago in Baton Rouge.
Orgeron doesn’t have Fournette at his disposal anymore with the star running back off to the NFL, yet LSU may still have the SEC’s most talented back on its roster with Derrius Guice still around. Guice was by far the Tigers’ most productive back last season, leading the SEC in rushing (1,387 yards) and averaging a whopping 7.6 yards per carry with 15 touchdowns.

The question, as it seems to be every season concerning LSU, is how much pressure the quarterbacks will be able to take off the ground game. Purdue transfer Danny Etling is back for his second season under center after starting nine games a season and throwing for 2,123 yards and 11 touchdowns. He kept his mistakes to a minimum with just five interceptions but rarely stretched defenses, throwing for just 193 yards per game.

Etling has one of his top receivers back from last season in D.J. Chark, who finished second on the team with 466 yards and three touchdowns while averaging 17.9 yards a reception. But Etling will have to find some more targets with Malachi Dupre and Travin Dural gone to the NFL.

Defensively, the front of the Tigers’ 4-3 defense under second-year coordinator Dave Aranda is led by one of the country’s premier pass rushers in Arden Key, who led the SEC and set an LSU single-season record with 12 sacks a season ago. The 6-foot-6 Key took a leave from the team for personal reasons following last season but returned this spring.

LSU has other significant pieces it has to replace on a defense that lost six starters off a team that tied for second in the SEC West standings last season, including All-SEC safety Jamal Adams and linebackers Kendall Beckwith and Duke Riley.