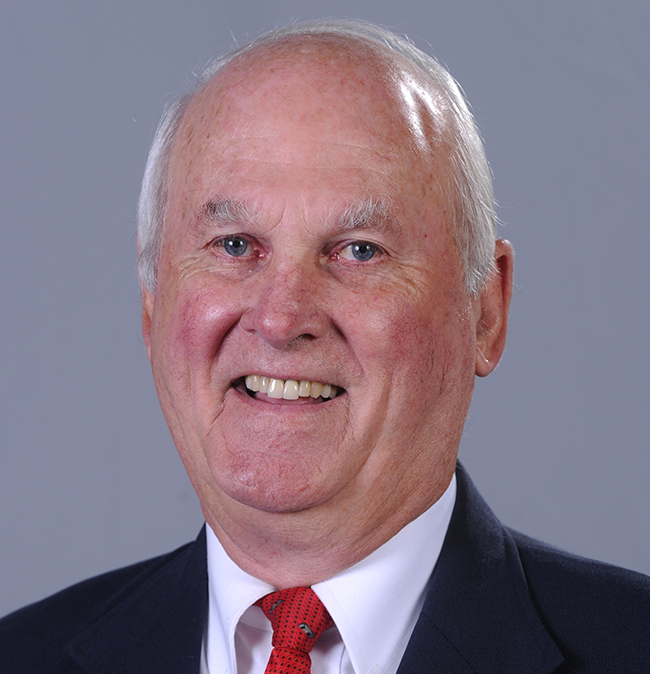 OXFORD, Miss. – Ole Miss and the State of Mississippi lost one of their greatest sports legends Sunday afternoon, July 9, 2017, with the death of Hall of Famer Edward S. (Eddie) Crawford III, who devoted 54 years of service to the University of Mississippi, including the final 11 years in a part-time role as Special Assistant to the Athletics Director.

Crawford, a native of Jackson, Tennessee, actually spent 58 years in Oxford, having been a star athlete for the Rebels and Ole Miss’ last three-sport letterman, excelling in football, basketball and baseball from 1953 to 1956. He also participated in track for one season. Eddie’s most important titles were husband, father, Pap and lovingly known as “Coach” by many. He is survived by his wife of 60 years, the former Shirley Wagner of Grenada, Mississippi, and two children, Kim (Brett) Sidelmann of Van Alstyne, Texas, and Kip (Whitney) Crawford of Oxford as well as two grandsons, Slater and Logan.

Born July 25, 1934 in Jackson, Tennessee, he was preceded in death by his parents Edward and Louise Crawford and a sister, Laura Beth Burnett.

“Eddie Crawford has given more than he received,” said University of Mississippi Chancellor Emeritus Robert Khayat. “As an unofficial ambassador for Ole Miss for more than 60 years, he served our university in virtually every capacity. He and his beloved wife, Shirley, were always friends of students, representatives of the university at weddings, funerals and social events and at state and national sports events.

“Eddie was an outstanding student (Omicron Delta Kappa) at Ole Miss and the Crawford home was always a welcoming place for their friends and for friends of the university. Intangible contributions are difficult to measure, but Eddie’s fingerprints are found across the life of the university and in the lives of our students. He will not be replaced, but he will be remembered and missed.”

After serving five years as associate director of the Foundation, Crawford was elevated to the position of director following the retirement of Billy Mustin in 1985, who had served as director since 1975. Crawford joined the athletics department in June of 1962 as head basketball coach, freshman football assistant coach and varsity scout. He was head basketball coach from 1962-63 to 1967-68, posting a 46‑97 record. His football duties included coaching the offensive backfield and receivers before taking on full‑time recruiting responsibilities in 1977. Following the 1979 season, Crawford joined Mustin in the Foundation.

As the starting left halfback, the “Rebel Clipper” helped lead Coach John Vaught’s Rebels to back-to-back Southeastern Conference titles in 1954 and 1955. Crawford had a three-year career rushing average of 6.4 yards per carry and also averaged 31.0 yards per kickoff return, which remains a school record. A two-way player, he also played a vital role in the Rebels leading the SEC in total defense in 1954 and 1956.

Crawford still ranks in a tie for third among Ole Miss single-game scoring leaders with his 24-point performance against LSU in 1956 as he scored once by rushing, twice on pass receptions and once on an interception. Little did he know at the time, Crawford’s four-TD performance in Baton Rouge would turn out to be a life-changing event. Apparently he was in the process of pursuing his future wife, Ole Miss head cheerleader Shirley Wagner, who had refused his previous attempts. Once his four TDs were in the record book, that all changed and they finally went on their first date. When they were finally married, it was a love affair which lasted 60 years.

Crawford was involved in numerous big plays on both sides of the ball during his Ole Miss career, but none bigger than his interception against TCU in the final minutes of the 1956 Cotton Bowl, which sealed the 14-13 win over the No. 5 ranked and Southwest Conference Champion Horned Frogs.

Although playing with a separated left shoulder, Crawford still contributed on both offense and defense that day in the Cotton Bowl Classic. With Ole Miss trailing 7-0 in the closing minute of the first quarter, he ripped off a 59-yard touchdown run, but a 15-yard penalty wiped out the score. Vaught’s Rebels then fell behind 13-0 in the first half before quarterback Eagle Day brought the Ole Miss offense back. Ole Miss finally captured the lead when Billy Lott’s five-yard run and Paige Cothren’s PAT with 4:22 remaining set the stage for Crawford’s late heroics.

Following the Ole Miss kickoff, TCU picked up a first down at its own 30. However, on the next play, Crawford made an impressive over-the-shoulder interception of quarterback Richard Finney’s downfield pass, then returned it 27 yards to the TCU 36. Day quickly used the final three plays to run  out the clock and Ole Miss had its 14-13 win.

In basketball, he started at forward for Coach B.L. “Country” Graham in a lineup that included All-Americans Denver Brackeen and Joe Gibbon. Pulling double duty (football and basketball) in the winter, Crawford practiced late at night after football practice. It was the same arrangement in the spring as he had to fulfill his spring football obligations before heading over to the baseball diamond.

“It was the hardest thing I had to do,” Crawford recalled for a Clarion-Ledger story which appeared just prior to his induction into the Mississippi Sports Hall of Fame. Although he enjoyed participating in other sports, football always remained his first priority.

Playing for Coach Tom Swayze, Crawford was an All‑SEC center fielder in 1956 when he led the league in home runs and served as team captain as the Rebels won the SEC Western Division and NCAA District III titles that season to advance to the College World Series.

Even though he didn’t letter in track in 1955, Coach Wes (Doc) Knight had him compete in the sprints during home meets. Since track season usually ran at the same time as spring football, it was not uncommon for Crawford to remove his pads during practice and head to the track for his scheduled event. Once he had competed on the track, Crawford would then return to the football practice field, put on his pads and get ready for the next play.

Crawford’s skills in football became legend at Ole Miss, but his greatest potential may have been on the diamond where he impressed major-league scouts both in high school and in college. He fondly recalled as a high school senior the week he spent in St. Louis when the Cardinals were attempting to sign him to a contract. “I was in the dugout in a Cardinals uniform and between innings would throw in the outfield in place of Stan Musial,” he said. Crawford declined the opportunity to sign with St. Louis to enroll at Ole Miss on a football scholarship.

It would not be the final time for him to be pursued by the majors as the Brooklyn Dodgers made a run at him just prior to his senior season, but Coach Vaught reminded Crawford he had come to Ole Miss to play football. Eddie and Shirley also wanted to get married his senior year, but Vaught’s policy didn’t allow players to be married, so they waited until after the 1956 season.

Following his collegiate career, Crawford played in the North-South Game in Miami, Florida, and was then drafted by the New York Giants of the National Football League. He was an instant success with the Giants in 1957, playing first team as a defensive back and flanker on offense. However, the nagging shoulder injury from his college days limited his pro football career to that single season, even though Giants assistant coach Vince Lombardi was encouraging Crawford to return in 1958.

With his mind made up to retire from the NFL, Crawford then entered the coaching ranks as an assistant at Greenville (Miss.) High School in 1958. He was named head coach at Greenville High in 1959 before returning to his hometown of Jackson, Tennessee, when he was named Jackson High School’s coach and athletic director in 1960, a position he held until returning to Ole Miss in 1962.

Prior to enrolling as a freshman at Ole Miss, Crawford earned All-Tennessee honors as an end in football and a center in basketball while playing at Jackson (Tenn.) High School.  He earned four letters in football, four in basketball and two in baseball during his prep career and served as captain of the 1952 Jackson High baseball team.  Crawford also played in the 1952 All-America high school football game in Memphis, Tennessee.