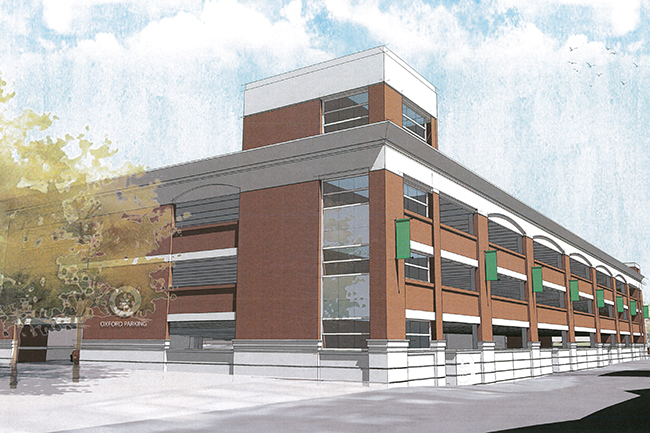 Testing done at the future downtown parking garage revealed debris and trash are located under the existing parking lot.

On Monday, the Oxford Public Works Department dug a test pit — an excavation made to examine the subsurface conditions on a potential construction site — on the site that is located behind Oxford Square North and to the south of Jefferson Avenue.

Mayoral said there was a gully located behind an old car dealership that was once located near the parking lot where people apparently dumped items at one time and that finding tires, concrete, bricks and rebar on the ground Monday wasn’t a big surprise to the engineers.

“We were anecdotally aware that there was rubbish in the area of the gully and the geotechnical report indicated that there were steel and other solid materials below the ground,” she said. “The test pit just gave a better idea of what we might expect to find.”

Most of the debris is located in southeast corner of the lot and only covers about 15 to 20 percent of the proposed garage footprint, according to Downtown Parking Advisory Commission chairman Tom Sharpe, who added there was money budgeted for removing debris and also a contingency for other unanticipated expenses.

“I don’t know at this point if (what was found) is worse, better or the same as they anticipated to find,” he said Tuesday morning. “We have to wait until we get the engineer’s analysis and see what we have to deal with.”

Mayoral said it’s unlikely the findings will prevent the garage from being constructed at the site and that the contractor should have been aware of the possibility of having to do some site dirt clean up when they bid on the project.

“Typically, the geotechnical report is included in the contract documents so that the contractor is aware of subsurface conditions for bid purposes,” she said. “The design engineer also uses the report to determine the depth of excavation and the foundation design.”