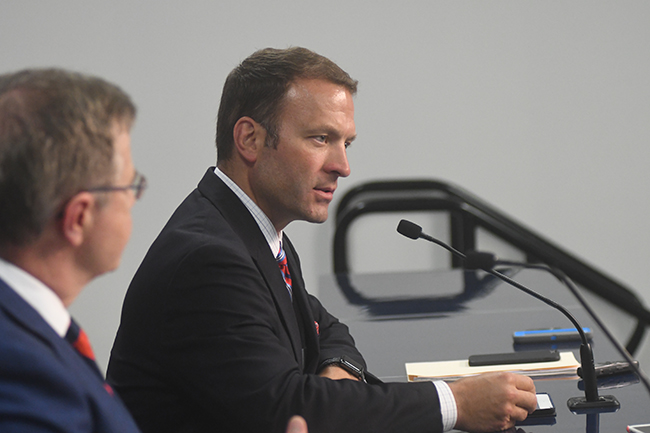 Ole Miss’ administration supported Hugh Freeze through it all for nearly five years until it couldn’t back its head football coach any longer.

In an sudden move, Freeze resigned Thursday after a thorough examination of his university-issued phone records revealed calls placed to numbers linked with escort services and massage parlors. The calls were discovered as part of an open-records request made by former Ole Miss coach Houston Nutt’s lawyer, Thomas Mars, as part of a lawsuit recently filed against the school’s athletics foundation on Nutt’s behalf that in part accuses Freeze, athletic director Ross Bjork and associate athletic director for communications Kyle Campbell of conspiring to blame more of the wrongdoing alleged in the school’s NCAA investigation on Nutt’s tenure than was accurate.

Speaking at a press conference Thursday night, Bjork and Chancellor Jeffrey Vitter both said Freeze’s resignation was unrelated to the actual investigation, which has brought 21 alleged rules violations against the program. Bjork added that Freeze would have been terminated with cause had he not agreed to resign.

Asked if Ole Miss’ administration regrets putting the amount of trust it did in Freeze before Thursday, Bjork again separated the investigation from the misconduct that resulted from Freeze’s phone usage.

“I believe our response (to the NCAA’s Notice of Allegations) again speaks for itself,” Bjork said. “I believe he has an established record that’s well, well documented in terms of how he ran the program around compliance. We still believe in that.”

Bjork and Vitter were unified in their backing of Freeze throughout the investigation despite 15 of the 21 charges being Level I allegations, or the most serious in the eyes of the NCAA. More than half of those are tied to Freeze’s tenure, including a failure-to-monitor charge against Freeze and a lack of institutional control.

There are allegations of booster involvement with current and former staff members and cash payments made to Mississippi State linebacker Leo Lewis, yet the administration defended Freeze at every turn. As part of its rebuttal against the charge that Freeze violated his head coaching responsibilities, the school offered a lengthy list of examples of what it thought showed Freeze promoting rules and establishing an atmosphere of compliance.

Of course, most of the investigative work done by the NCAA during its investigation came after Freeze sent an infamous tweet in 2013 asking anyone who had facts about any violations to email the school’s compliance department and to not “slander these young men” in response to allegations that Ole Miss was cheating in recruiting.

Were Bjork and Vitter duped by their former employee? Bjork wouldn’t go that far.

“I can only go on the facts, and that’s really how we made the decision,” Bjork said. “We really tried to take the emotional part out of this. What does the record show? What did we discover how did he address it? He admitted that conduct to us. No one’s perfect. None of us in this room are perfect. And I think moving forward, I think we have to just respect how he resigned and we need to respect his privacy.”