Five true freshmen that could contribute immediately for Ole Miss 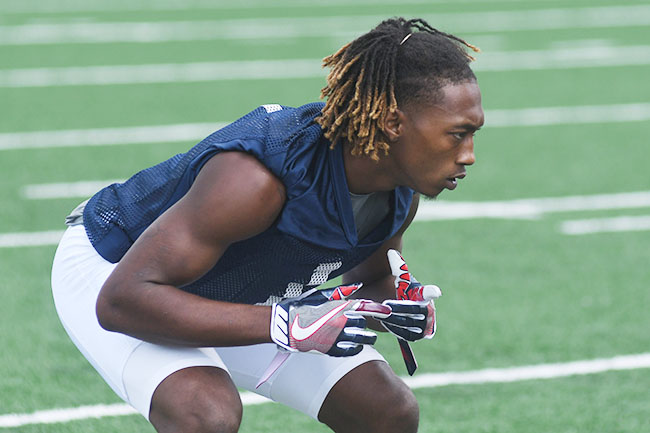 One word has been constant from Ole Miss’ coaches and players through the first two weeks of training camp: Competition.

And there are a number of true freshmen that are a part of it.

Grabbing a starting spot is far-fetched, but a host of newcomers are in line to contribute this season through a mix of how they’ve performed in camp and needs at certain positions. Here are five true freshmen most likely to get immediately playing time this fall:

D.D. Bowie
This isn’t a surprise considering Bowie was the highest-rated signee in Ole Miss’ recruiting class, but the former four-star signee has met expectations early.

Bowie has been the buzz among the group and is already running with the second-team defense after the Rebels lost four contributors at cornerback off last year’s team. Also a receiver in high school, the 6-foot-1 Bowie already has the speed and range coaches covet in corners.

“He can run with anybody, and if you throw the ball his way, he’s going to make a play,” fellow corner Jaylon Jones said. “You can tell he’s one of those players when he gets the ball in his hands, he’s going for a touchdown.”

There’s room for Bowie to improve with his technique and consistency, but the Morton native could be the first true freshman to step on the field Sept. 2.

“Just locking in and focusing,” interim coach Matt Luke said, “but he’s got a lot of ability.”

Breon Dixon
First-year defensive coordinator Wesley McGriff is implementing an attacking 4-3 defense, but the third linebacker will be the Star, or hybrid spot, similar to the Huskie position in former coordinator Dave Wommack’s defense.

That’s where Dixon comes in.

Junior A.J. Moore is penciled in as the starter there, but Dixon is right behind him. Dixon went through the spring as an early enrollee and is more familiar than most newcomers with McGriff’s system.

A linebacker in high school, the 5-11, 206-pound Dixon also has the versatility to play other positions, including safety if the Rebels feel they need the help alongside Zedrick Woods.

Mohamed Sanogo
Simply put, Ole Miss doesn’t have many proven commodities at linebacker beyond DeMarquis Gates, giving Sanogo and the Rebels’ three other newcomers at the position a chance to earn early playing time.

Sanogo, rated a four-star prospect by Rivals.com and Scout.com coming out of Texas’ Plano West High, was Ole Miss’ highest-ranked linebacker signee and already has the size at 6-2 and 228 pounds. He has spent most of camp getting third-team reps at middle linebacker with more experienced players ahead of him on the depth chart.

Sanogo could contribute on special teams even if he doesn’t crack the six-man rotation at linebacker.

Josh Clarke
Another linebacker signee, Clarke could contribute this season for many of the same reasons as Sanogo.

Ranked a four-star prospect by ESPN, Clarke inked with the Rebels out of New Orleans’ Riverdale High and recorded more than 115 tackles in both his junior and senior seasons. Clarke, who’s also mainly gotten third-team reps during camp, has good size on the outside at 6-2 and 217 pounds and could be a prime special teams candidate his first year in Oxford.

“They’re guys that have worked very hard and have a chance to be in the mix,” linebackers coach Bradley Dale Peveto said of Clarke and Sanogo. “We’ve got some older guys that are ahead of them right now, but we are evaluating them.”

C.J. Miller
At a safety position that’s also in need of more playmakers, Miller could find his way on the field early.

Miller has spent most of camp getting third-team reps with senior C.J. Hampton and junior C.J. Moore locked in a battle for the starting job at free safety. But McGriff said recently the Rebels don’t have a No. 2 safety right now behind Woods, adding he could fill it by committee unless someone separates himself soon.

The 6-0, 191-pound Miller could be an option there and on special teams.

Donta Evans working to seize opportunity in middle of…