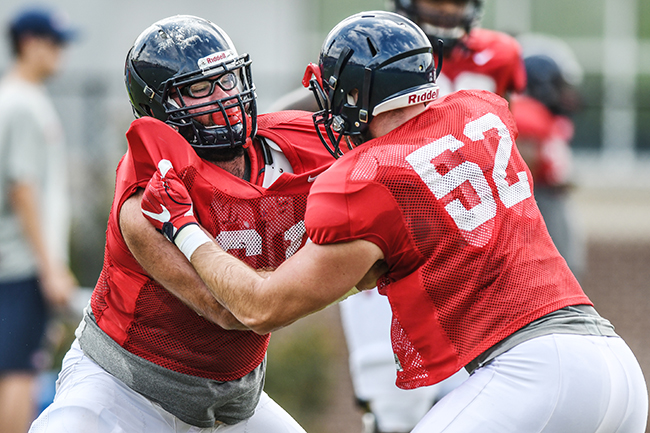 Ole Miss returned to the practices field Tuesday morning and worked out in full pads with the first 10 periods open to the media. Here are some notes from the viewing periods:

• Nose tackle Benito Jones, who was hospitalized over the weekend to have precautionary X-rays on his spine, did not practice. Josiah Coatney and Breeland Speaks, who’s been running second team behind Coatney for the majority of camp, were the first-team tackles Tuesday.

Interim coach Matt Luke said Jones will have to pass protocol similar to a concussion before returning and could be back early next week.

• Cornerback was thinned out with Myles Hartsfield and D.D. Bowie both out. Hartsfield, a projected starter, watched practice with a wrap on his knee while Bowie, a true freshman who’s been repping with the second team throughout camp, was held out with a concussion.

True freshman A.J. Harris got some second-team reps in their absence.

Luke said the hope is to get Jefferson “some” practice time before the Sept. 2 opener against South Alabama. Wilkins’ status is day to day.

A.J. Brown worked in the slot with DaMarkus Lodge and DK Metcalf on the outside with the first team. D’Vaughn Pennamon and Eric Swinney continue to get a bulk of the first-team reps with Wilkins out.

• Bradley Dale Peveto continued to send linebackers in and out as he tries to get closer to nailing down a six-man rotation. DeMarquis Gates, Detric Bing-Dukes, Donta Evans, Jarrion Street, Tayler Polk and Brenden Williams along with true freshmen Josh Clarke and Mohamed Sanogo all got looks with the first three teams.

Video from Tuesday’s viewing periods is below.

C.J. Moore among those looking to emerge as Ole…