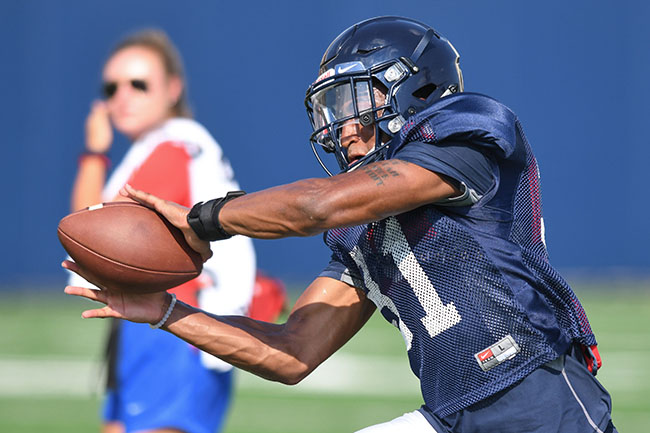 Ole Miss held its 18th practice of training camp Tuesday afternoon, turning some of its attention to preparation for its Sept. 2 opener against South Alabama. Here are some notes from the first 10 periods, which were open to the media.

• Defensive tackle Benito Jones was dressed out and went through drills did but was held out of the contact periods. Jones, who’s been running with the first team at nose tackle, had been held out of practice since spending a night at Baptist Memorial Hospital-North Mississippi after taking a hit to the spine Aug. 12, but all tests came back negative.

• Slot receiver Van Jefferson (knee scope) returned to practice. Jefferson has been held out of recent practices as a precaution but was a full participant during the viewing periods. Freshman cornerback D.D. Bowie (various injuries) was dressed out.

• First-team tight end Dawson Knox (foot) did not practice with interim coach Matt Luke saying Knox is the only player with an injury that’s questionable for the opener. Defensive end Qaadir Sheppard (leg) and offensive lineman Jordan Sims (ankle) rode a stationary bike off to the side as a precaution.

“It’s kind of day to day,” Luke said of Knox’s injury. “He’s just struggling to push off of it, so we’re trying to get it to where we can manage it. We’re trying to keep him off it right now for as long as we can and just see how he can do when we get into game week. We may have to sit him, but we’ll find out the week of the game if he can go.”

• Jaylon Jones, who played in all 12 games with one start at cornerback last season, continued to work with the safeties, taking second-team reps there. Ken Webster, who’s spent some time at safety during camp, ran with the second team at cornerback along with junior college transfer Javien Hamilton. The first-team corners were Myles Hartsfield and Jalen Julius while C.J. Moore ran with the first team at free safety.