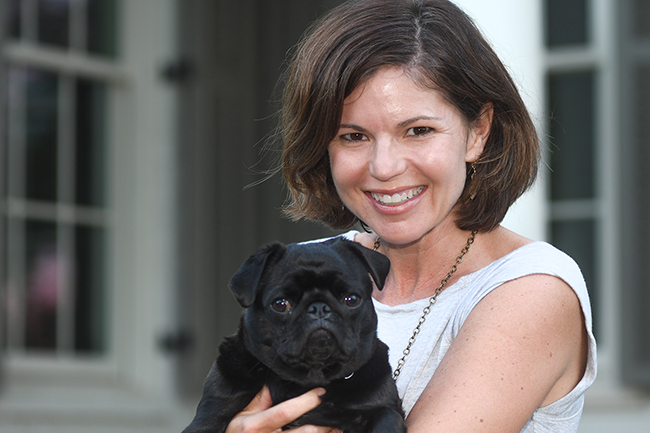 Chandler Laws holds her dog, Hugo, who was returned after being stolen at Pat Lamar Park. (Photo/Bruce Newman)

Earlier this month, a local family celebrated a new four-legged addition to their family.

Across town, another family was distraught after their beloved dog was stolen.

Three days later, they found out the two families shared something in common — the same dog.

Chandler Laws said her black, 10-month pug Hugo got away from her at Pat Lamar Park in the early evening on Aug. 12.

“We put fliers out everywhere,” Laws said. “We kept hoping someone would turn him into the shelter.”

Three days later, Laws received a phone call from a young Hispanic boy who was translating for his father. He told Laws that he thought his family had her dog.

“I told him to text me a picture of the dog and sure enough, it was Hugo,” she told the EAGLE on Thursday.

Laws and a friend met with the man who said his family bought the dog from a man in the Walmart parking lot three days prior. He paid $300 for the dog.

“He said his family fell in love with the dog and he got family members to chip in so he could buy him,” Laws said.

The man returned to Walmart on Aug. 12 and saw one of the fliers showing a picture of Hugo and realized he had purchased someone’s stolen dog.

Laws repaid the $300 the man spent on the dog and a little extra. She offered to help his family adopt another dog.

“He wouldn’t let me,” Laws said. Wanting to do more for the honest man, she connected him to with the Hispanic ministry at her church.

When the Laws met the man, he had his wife and two children with him.

“My son ran up to his son and they laughed and hugged,” she said. “Turns out they are in the same second-grade class at Oxford Elementary.”

The next day, Laws received another call from someone claiming to have information about her dog.

“I told them I already got Hugo back,” she said. “But the woman said she worked at a gas station at the three-way (corner of Highway 30 and North Lamar Boulevard). She said she had the license plate number of the person who might have stolen the Laws’ dog.”

The woman said an older white couple in a “long, gold car” was sitting in the parking lot of the gas station trying to sell two dogs — one of them being a black pug. The woman told the couple they needed to leave. However, the man who sold the dog at Walmart was African-American.

“I think whoever bought Hugo from the couple turned around and sold him at Walmart,” she said.

When Laws heard the description of the couple, she was reminded of an odd occurrence two weeks prior to Hugo being stolen.

“Then I remembered, about two weeks ago, Hugo got out again and was running around the park,” Laws, who lives next to Pat Lamar Park, said. “I saw a woman with Hugo in her arms and I said, ‘Oh, thank you. You found her.’ She then told me, “I’m a Christian woman and God tells me where dogs need to be.”

The older woman left in a long, gold car.

Laws has since filed a report with the Oxford Police Department.

“There’s dog trafficking going on here in Oxford,” she said.

Other than getting Hugo back, Laws said another silver lining was found in the response by friends and the Oxford community who helped by sharing Facebook posts and putting up fliers looking for Hugo.

“It’s crazy how the community came together for us,” she said. “Everyone rallied together and tried to find him.”