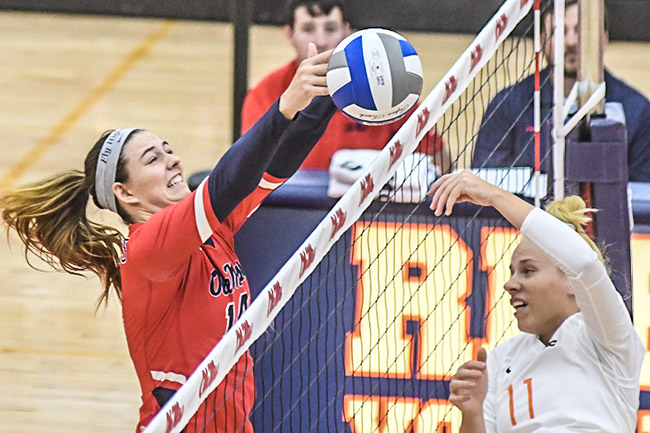 OXFORD, Miss. – Another double-double from senior outside hitter Lexi Thompson and strong play from the middles powered the Rebels past Florida A&M on Sunday at the Gillom Sports Center in the last match of the Rebel Invitational.

Thompson posted her 37th career double-double and third of the season with 14 kills on a .312 attack percentage and 17 digs. She averaged close to five kills and six digs a set to pace the Rebels.

Set one went back and forth with neither side holding more than a three-point lead. With Florida A&M up 21-20 late in the set, the Rebels went on a 5-0 run with five straight kills, including two by senior outside hitter Kate Gibson to take it 25-20.

The Rebels pushed out to an 11-6 lead to begin set two forcing a timeout from Florida A&M. The Rattlers pulled to within one late, 20-19, but a service error and a tandem block by sophomore Emily Stroup and freshman Bayleigh Scott pushed the lead back out to three, 22-19. Stroup, who finished the day with six kills, had two of them in the final three points for the Rebels to secure the set 25-21.

Ole Miss raced out to an 11-5 lead in set three and Florida A&M never got closer than four as the Rebels finished out the set 25-20 and the match 3-0.

Quick Hits
• Ole Miss improved to 3-1 on the season
• The Rebels broke the tie with Florida A&M and now lead the series 2-1.
• Junior libero Caroline Adams and sophomore Emily Stroup were named to the All-Tournament Team.
• Stroup hit .267 for the weekend with 48 kills, including hitting above .300 in both wins over Chattanooga and Florida A&M.
• Senior Lexi Thompson posted her 37th career and third of double-double of the season with 14 kills and 17 digs against the Rattlers. She hit .312 for the match.
• Thompson averaged 3.12 kills and 4.25 digs per set this weekend.
• Thompson totaled 68 digs for the weekend, and now needs just 14 to join her teammate Kate Gibson in the 1,000/1,000 club. Gibson became the first member of the club in the rally scoring era at Ole Miss on Friday night against North Dakota.
• Sophomore Nayo Warnell and freshman Bayleigh Scott combined for 12 kills and 10 blocks from the middle and both hit at a high percentage. Warnell had seven kills on a career-best .636 clip and Scott finished with five on a .400 percentage.
• Warnell finished the weekend with 25, nearly a block a set, and hit .357. Scott totaled 17 kills and hit .424 in her first tournament with the Rebels.
• Freshman Lauren Bars totaled 22 assists and sophomore Jordan Fate had 14. Bars finished the weekend with 115 assists and Fate 63.

Next up…
Ole Miss heads to Jonesboro, Arkansas Sept. 1-2 for the Arkansas State Tournament. The Rebels open up with Virginia Tech on Friday at 11 a.m., followed by SMU at 4 p.m. The tournament concludes with a match against host Arkansas State on Saturday at 6:30 p.m.