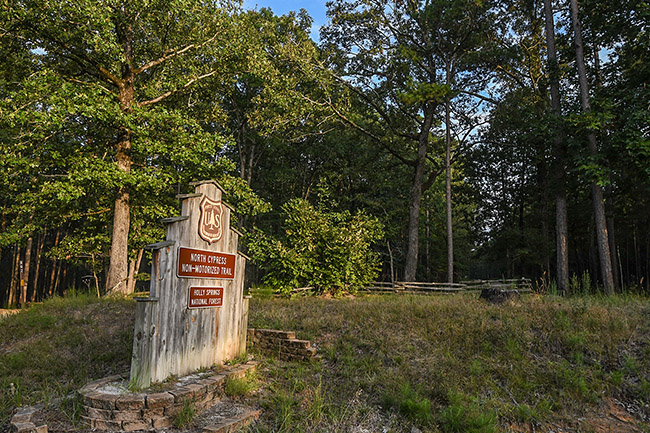 In 1999, a group of friends riding horses on graveled roads in the Holly Springs National Park discussed how it would be nicer to be able to ride through the woods on a marked trail. They formed an official non-profit group called the North Mississippi Trail Riders Association and seven years later, the North Cypress Non-motorized Trail was officially opened.

The group partnered with the U.S. Forest Service and received a $175,000 grant that was given with the guarantee the association would match the grant in labor hours to build the trail.

“We matched it in sweat equity,” said Wayne Perkins, one of the charter members of NMTRA and current Exchange Club president.

The 3.3-mile trail is open to hikers, mountain bikers and horseback riders at no cost and is located off Highway 30, about 10 miles from Oxford.

A decade after its official grand opening on April 1, 2006, Perkins said the NMTRA was ready to disband as an organization since the U.S. Forest Service continues to maintain the trail.

Then came the decision as to what to do with the association’s remaining funds sitting in a bank account.

“When I was thinking about who to give the money to, I looked at several groups and I couldn’t think of any that do more for the community than the Exchange Club of Oxford,” Perkins said.

On Tuesday, at the Oxford EAGLE office, Perkins handed Mississippi State Exchange Club President Margaret King, who is also a past president and current member of the Oxford club, a check for $3,196.

“When Wayne called me yesterday to talk about this, I thought it was just one of the best things ever,” King said. “The Exchange Club does do a lot for Oxford and Lafayette County and this money will help fund several projects.”

The Exchange Club recognizes local emergency responders by giving out a Police Officer of the Month award and an annual Firefighter of the Year Award. They support the Oxford Boys and Girls Club and the Exchange Club Family Center, as well as many other local programs geared toward children and veterans.