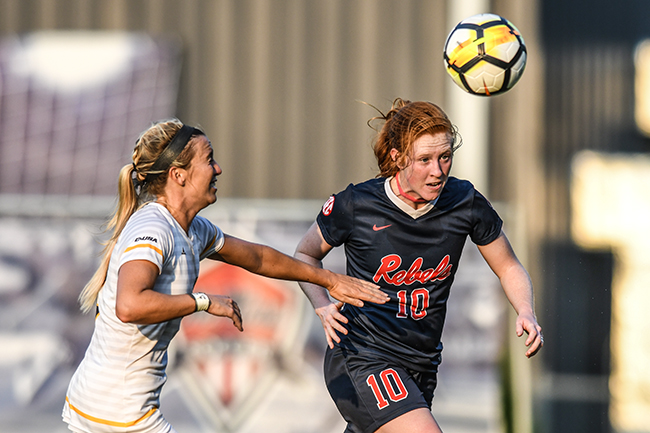 Ole Miss continued to flex its offensive prowess with an 8-0 win over in-state rival Southern Miss on Sunday night, which included the third hat trick of the season.

It’s the third time the Rebels (5-0-1) have scored eight goals in a game and the second time freshman Channing Foster has found the back of the net three times in a contest.

The scoring again started early on with a goal in the 5th minute on a penalty kick by junior CeCe Kizer’s penalty kick. Kizer was awarded the penalty attempt after being grabbed inside the 6-yard box by Southern Mississippi goalkeeper Kelly Brahmbhatt. From there, the Golden Eagles (4-1) played the rest of the match with only 10 players, giving Ole Miss an even bigger opportunity to score.

The 15th minute brought the second goal of the night when Grace Waugh sent a beautiful cross into the box, which Julia Phillips was perfectly aligned for and headed it into the back right corner. Four minutes later, Foster flicked it into an empty net for a 3-0 lead.

Her second goal would come in the 50th minute when she buried a shot with space directly in front of the net off a Kizer assist, her second of the night. Just six minutes later, senior captain Bella Fiorenzo converted a penalty kick after a Golden Eagle foul in the box, pushing the advantage to 5-0.

Foster finished off the hat trick in the 60th minute when she hit the left post, and the deflection snuck through for the score. Freshman Molly Martin was credited with the assist, her first of the year.

Sophomore Alley Houghton collected her second goal of the season in the 79th minute when she completely beat a Golden Eagle defender in the corner, then had her way with the backup keeper for a punch into the left corner. Then, with less than a minute to go, junior Marisa Kutchma buried a cross from Mary Kate Smith to cap the scoring at 8-0.

Up Next
Ole Miss heads to Memphis September 8 and September 10 for a pair of games at the Memphis Tournament, including a Friday night contest versus Tulsa at 5 p.m., and a Sunday night tilt with the host Tigers at 7 p.m.