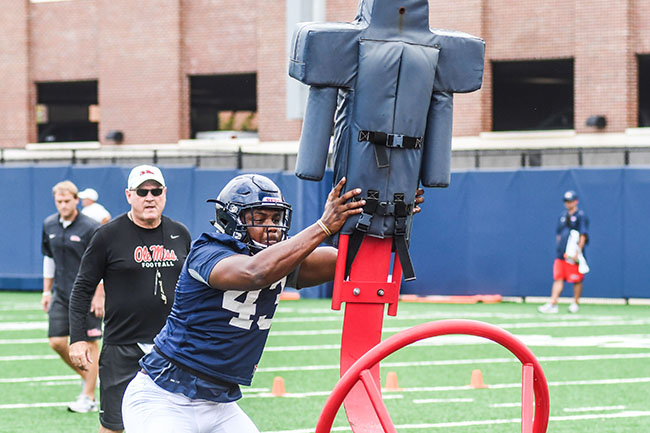 Bing-Dukes and Webster will return to the field Saturday against Tennessee Martin after serving a one-game suspension. Their punishment stemmed from being arrested on shoplifting charges at Walmart in August.

Bing-Dukes was listed as Donta Evans’ backup at middle linebacker on Ole Miss’ updated depth chart Monday while Webster was listed as a second-team cornerback behind Jalen Julius, but McGriff said both players could end up starting against the Skyhawks depending on how they practice this week.

Webster, who’s coming back from reconstructive knee surgery, took reps at safety and corner in training camp but has moved back to corner permanently. Bing-Dukes played in 11 games last season with three starts, tallying 41 tackles in his first season with the Rebels.

McGriff is also confident in Evans manning the middle of the defense after watching the redshirt freshman hold his own in his first career start last week against South Alabama.

“I thought Donta did a tremendous job of being poised, making the calls and getting the defense set,” McGriff said. “He was very engaged.”

The tackling issues that plagued the defense throughout last season popped up again against South Alabama.

The Jaguars averaged 10.7 yards per completion and nearly 5 yards a carry, numbers that could’ve been smaller if not for whiffs made by initial defenders. Safety C.J. Moore led Ole Miss with eight tackles, but nobody else had more than five.

“I’m not satisfied with the way we tackled on defense,” McGriff said. “I thought we populated the football very well, but there’s too much leaky yardage. The first guy there, we’ve got to get a hand on his cloth or come up with a body part and not let him gain additional yardage.”

Interim coach Matt Luke said the Rebels went with less padded practices last week in order to try to get players’ legs back under them leading up to the season opener, which may have contributed to the sloppy tackling, but it will be an emphasis this week.

Picking up the pace

Much of the talk about first-year coordinator Phil Longo’s offense in the offseason was the breakneck pace at which it operated, but Longo said the Rebels’ tempo Saturday was “probably my biggest disappointment.”

It didn’t come as a complete surprise to Longo, who urged quarterback Shea Patterson to take his time recognizing the defense’s alignments and getting the Rebels’ offense in the right play in his first game running Longo’s offense. It worked more times than not as Patterson threw for 429 yards and four touchdowns.

Tight end Dawson Knox (foot) will start running this week but will likely miss his second straight game Saturday. Luke said the hope is that Knox will be ready for the Rebels’ game at Cal on Sept. 16.

Guard Jordan Sims (ankle) and running back Eugene Brazley (foot/ankle) are probable for Saturday’s game, Luke said, while defensive end Qaadir Sheppard (foot/ankle) will likely be a gametime decision. Freshman cornerback D.D. Bowie injured a ligament in his thumb and will be further evaluated this week.