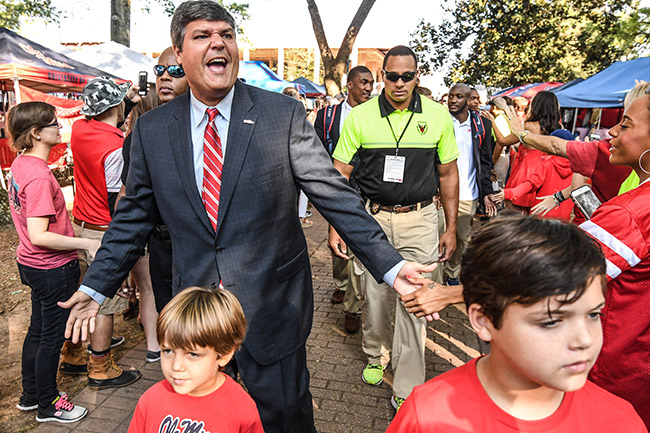 Ole Miss interim head coach Matt Luke leads the team through the Grove for the game against Tennessee-Martin at Vaught-Hemingway Stadium in Oxford, Miss. on Saturday, September 9, 2017. (Bruce Newman, Oxford Eagle via AP)

Ole Miss may have to go through part of its preparation for California this week without its coaching staff intact.

Interim coach Matt Luke, running backs coach Derrick Nix and tight ends coach Maurice Harris are each required to appear at Ole Miss’ hearing with the Committee on Infractions, which begins Monday in Covington, Kentucky. The hearing will continue Tuesday and could trickle into Wednesday.

Luke isn’t named in any of the 21 alleged violations tied to the NCAA’s investigation into the football program but is required to attend as the Rebels’ acting head coach after Hugh Freeze abruptly resigned in July amid a female escort scandal. Nix and Harris were both requested to appear after being accused of helping arrange impermissible benefits for recruits — both Level-I charges — though Ole Miss is refuting the allegation against Nix.

Luke said after the Rebels’ 45-23 win over UT Martin on Saturday that he still isn’t sure how long he’ll have to be at the hearing. Monday is an off day for the Rebels before they return to practice Tuesday in preparation for Saturday’s game at Cal (9:30 p.m., ESPN). The team will fly to California on Thursday.

“I’m mainly a motivator on both sides of the ball,” Luke said. “Both of those guys do their deal, and it won’t be a big distraction. I would be running around and motivating, so that’s all that they would miss. But as far as Xs and Os go, it won’t be an issue.”

Longo said Nix and Harris began the initial prep work for the Rebels’ next opponent a day earlier than usual in the event they have to miss any practices. Ole Miss will rely on the help of graduate assistants to coach tight ends and running backs if that happens.

“We’ve got some mature players at each of those positions and we have some GAs that do a phenomenal job,” Longo said. “We’ll cover it for the day and be just fine when they get back.”

A bowl ban this season is part of the penalties the school has already self-imposed in response to the investigation, which includes 15 Level I charges, but a final ruling in Ole Miss’ case won’t come until six to eight weeks after the hearing.

Luke and his players don’t expect what’s going on in suburban Cincinnati this week to distract the Rebels from their preparation for the trip out West.

“We’ve got 10 more games to go, and that’s all we’re focused on,” linebacker DeMarquis Gates said. “The outside distractions, that’s going to happen whether we’re listening to it or not. Just keeping our heads focused and worried about Cal next week.”

Said Luke, “They knew it was coming. This team has been through a lot. It’s just one more thing that I think we’ll use as motivation and use it to help us prepare.”