Ole Miss wants more simplicity on both sides of the ball 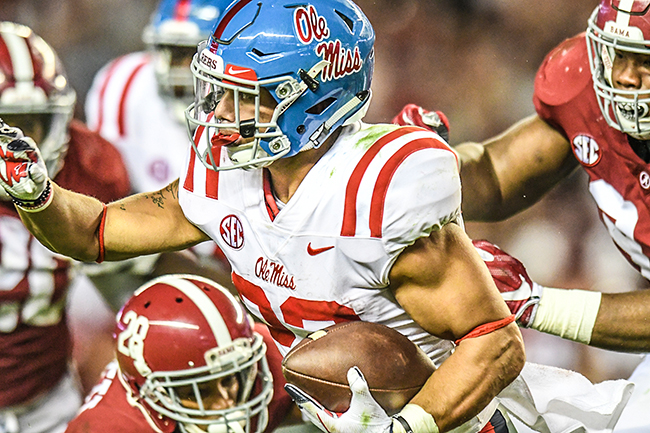 Ole Miss’ nine-touchdown loss to Alabama over the weekend has the Rebels re-evaluating everything.

One thing interim coach Matt Luke and his coaching staff agree is apparent: Things need to get simpler.

While the talent discrepancy against Alabama played the biggest part, Luke said a review of the game film showed players thinking too much and not reacting quick enough. Alabama racked up 613 yards, 365 of those coming on the ground, while Ole Miss’ offense was held to a season-low 253 yards, including just 88 on the ground for an offense that ranks last nationally in rushing.

With six Southeastern Conference games left starting with a trip to No. 13 Auburn on Saturday (11 a.m., SEC Network), Luke said being more competitive has to start with eliminating some of the clutter.

“You take some stuff out where you can just focus and get better and rep the same things and every single look you can possibly get,” Luke said. “I think the more that you simplify, the faster they get with the plays and the more they will understand what’s going on and they can problem-solve on the field.”

Defensively, coordinator Wesley McGriff said there’s a disconnect at times with certain players in terms of how they diagnose plays in the film room and the execution of it on the field. It’s not just young players either but “across the roster,” he said.

The Rebels are giving up nearly 10 yards per completion and an SEC-worst 5.3 yards per carry after surrendering a whopping 7.2 yards a pop against the Crimson Tide. McGriff said he will further assess his personnel to see if certain players who aren’t getting many snaps could help more in certain packages while he could also cut down the playbook to the point that calls get repetitive.

McGriff said linebacker Jarrion Street and freshman safety C.J. Miller are players who will get a closer look in practice.

“I told myself all day (Sunday) and (Sunday) night, ‘Don’t get bored with calling that call 20 times,’” McGriff said. “Give them a chance to see it against every situation so they can go out and problem solve. We’ll reduce it in that way. We may go in with less defense than we like in normal situations, but hopefully we can override that problem and get some production.”

The offense has produced three points in its last six quarters after averaging 46 points against South Alabama and Tennessee Martin. The Rebels still own the Southeastern Conference’s top passing offense (361.5 yards per game), but the recent step up in competition has made it more difficult for quarterback Shea Patterson and his receivers to move the ball through the air with a running game that isn’t offering much balance.

With defenses pinning their ears back against an offensive line that’s banged up with center Sean Rawlings trying to tough out an ankle injury, protection has broken down. The Rebels have allowed eight sacks against their first two Power Five opponents.

Offensive coordinator Phil Longo said he won’t cut down on the number of plays but rather the calls for the line and Patterson in order to try to get the offense moving at a faster pace.

“We have some more direct play calls that don’t have maybe quite as many choices as we’ve had in the past so maybe we can snap the ball little quicker and make the play a little simpler for our quarterback,” Longo said.

The goal, Luke said, is to help the Rebels get back to an aggressive, attacking approach that he believes his team is capable of.

“We have talented kids, but we also have young kids,” Luke said. “I think they have to know exactly what to do so they can go play fast.”