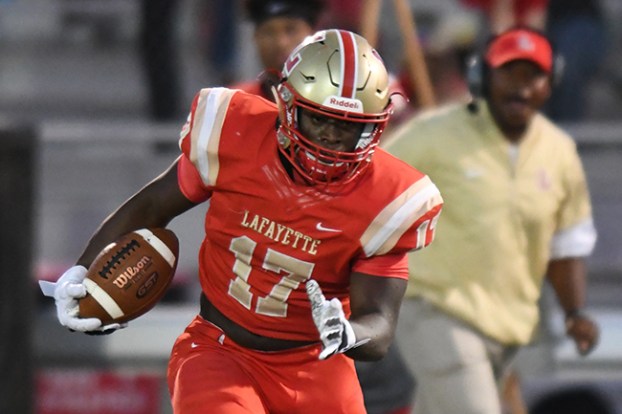 Lafayette wants to build off first win of the year

Lafayette got their first win. Now comes the hard part.

After a dominant victory over Saltillo last Friday, earning their first win in Region 1-5A as well as the season, the Commodores must keep that momentum.

It is a quick turnaround with Lafayette hosting Lewisburg on Thursday for Homecoming (7 p.m., 105.1 FM).

“This is week eight. It’d be different if it was earlier in the year,” Lafayette head coach Michael Fair said of the shortened week. “We just modified our practice a little bit (Monday) and (Tuesday). Our walkthrough (today) will be just a little bit longer. …it does change things a little bit but not too much.”

The Commodores put up 344 yards against Saltillo last week with senior Jamarcus Quarles rushing for 171 yards and four touchdowns in their 45-15 win.

“We got our run game going early,” Fair said. “That’s who we want to be. We were able to do some good things on the line of scrimmage. Our offensive line is getting better every week.”

Last season the Commodores were in a region that consisted of six teams. That number has increased by two with their jump up to Class 5A. Getting a win last week and staying out of a 0-2 hole was a positive step towards Lafayette’s postseason chances.

“It’s huge,” Fair said of their first region win. “We feel like we’ve been behind the eight ball all year. We started our second season which is district and we’re finally .500. We’re .500 and looking to get a winning record in district play. That’s all that matters right now.”

Lewisburg (4-2, 0-2) heads into Thursday’s game in that hole and looking to get their first region win. The Patriots are coming off a 34-7 loss at home to undefeated Olive Branch (6-0).

Senior quarterback Bryce Brock has thrown for 892 yards and 10 touchdowns in five games played. Brock has also rushed for 119 yards and three touchdowns on 39 carries.

“(Lewisburg) is a very solid football team. Well coached,” Fair said. “Athletic in several positions. They’re good enough to really stress you on both sides of the ball.”

Andy Kennedy will use the next five weeks to try to figure out exactly what the identity of another mix... read more